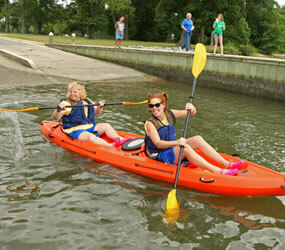 Lisa Shipley was willing to kayak 100 miles to show her love for Mount Carmel Elementary School.

In the end, the principal kept it to the waterways of the Middle River during a five-day event called Paddle with Purpose with assistant principal Casey Buckstaff.

As rain fell down and the administrators departed on their maiden voyage June 9 from Wilson Point Park, the school’s choir stood on the dock singing the rock classic “Yellow Submarine.”

The school worked with Baltimore County Recreation and Parks and the Essex-Middle River-White Marsh Chamber of Commerce to plan the project, which Shipley hopes will be yearly.

Shipley wanted to raise money and awareness for the school and put a spotlight on its neighbors. In the end, Mount Carmel raised “several thousand dollars,” according to Shipley and more than 900 people participated in various activities.

“There are a lot of beautiful parks and waterfront restaurants and destinations,” Shipley said. “It was a great community-builder. We’ve heard a lot of ‘Is there going to be Paddle 2?’ ”

Father John Rapisarda, temporary administrator of Our Lady of Mount Carmel parish, led a prayer on the shores of the river on the first day of activities.

Local businesses were major sponsors the event. Some, like Johns Hopkins Bayview Medical Center, were there to give away first-aid kits. McDonalds handed out apples.

Teachers, families and students participated in various activities throughout the week, including in turtle races. Children participated in a shallow water kayak races later in the week. Beach parties, lunches and Mass were highlights as well.

The seeds for the idea of Paddle with Purpose was born two years ago as the school had an entry in the Catholic Charities’-sponsored Dragon Boat Race at Baltimore’s Inner Harbor. It was a huge success.

“Once we did that and everybody trekked to the harbor with so much spirit, I thought about what we could do in our own community,” Shipley said. “I think our families are very supportive of the school, but also support the community they live and work in.”