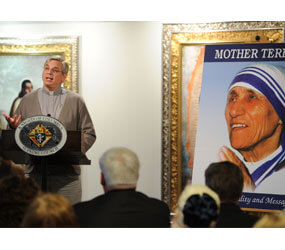 NEW HAVEN, Conn. – Father Brian Kolodiejchuk of the Missionaries of Charity, postulator for the sainthood cause of Blessed Teresa of Calcutta, told a gathering at the Knights of Columbus Museum in New Haven June 1 that her cause is “still waiting for one more miracle” for her to be declared a saint.

With worldwide events now under way to mark the 100th anniversary of her birth Aug. 26, Father Kolodiejchuk was in New Haven to talk about her life and mission as part of a current exhibit at the museum, “Mother Teresa: Life, Spirituality and Message.”

“So far, that hasn’t been one case that is strong enough to pass the medical board” of the Vatican Congregation for Saints’ Causes, he said. “But we’re still hoping and praying.”

Father Kolodiejchuk also serves as superior general of the Missionaries of Charity Fathers, the religious order of priests founded by Mother Teresa in 1984 and now based in Tijuana, Mexico.

In general, two miracles must be accepted by the church as having occurred through the intercession of a prospective saint, one before beatification and the other before canonization.

“We get thousands of reports of favors from people praying,” he noted, “but so far, nothing that can be presented as a miracle.”

The day after the priest spoke, Mother Teresa’s crucifix, rosary and sandals and a reliquary containing her blood were exhibited for one day of veneration at the Basilica of the National Shrine of the Immaculate Conception in Washington. The crucifix was the one she wore from the time of her first vows at age 20 until her death in 1997 at age 87. The rosary and sandals were those used by Mother Teresa at the time of her death.

The relics then traveled to St. Patrick’s Cathedral in New York June 7 for veneration and a Mass that Father Kolodiejchuk was to celebrate.

Father Kolodiejchuk said the legacy of the “saint of Calcutta” is to remind us of what it means be human – “that we are created for greater things, to love and be loved.”

“She saw the value of every human being,” he said, “and had a very deep, profound sense of the sacredness of the human being” and an understanding “that every single human being is a child of God created in the image of God.”

The exhibit at the New Haven museum, which runs through Oct. 4, chronicles Mother Teresa’s life from childhood to beatification. It includes biographical information, artifacts such as her sari and other religious and personal articles, and a full-scale replica of Mother Teresa’s room in her Calcutta convent.

Father Kolodiejchuk was introduced to Mother Teresa in 1977 by his sister, now Sister Charbel, who currently serves as mother superior for the Missionaries of Charity house in Bridgeport. He is editor of “Mother Teresa: Come Be My Light,” a collection of her private writings.

“She was a woman passionately in love with Jesus,” the priest said. “She taught us that the way to our human fulfillment and happiness begins by giving oneself through love put into action through service to others” and by doing “ordinary things with extraordinary love.”