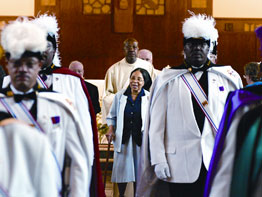 As the Vatican considers the testimony of a woman who says she was cured of a life-threatening condition through the intercession of a 19th century Baltimore nun, similar testimonies from around the world are making their way to the motherhouse of the Oblate Sisters of Providence in Arbutus.

Already filling three volumes, the letters have arrived from Ireland, Cuba, the Philippines and all over the United States – bolstering hopes that Mother Mary Lange may one day be named a saint.

Mother Lange, who founded the Baltimore-based Oblate Sisters of Providence in 1829 as the first woman’s religious community for African-Americans, needs a miracle approved by the Vatican to be beatified. A second miracle will then be needed for Mother Lange to be proclaimed a saint.

In a May 31 service of commitment promoting the cause for the canonization of Mother Lange, Archbishop Edwin F. O’Brien called Mother Lange a woman who never forgot the dignity of every person – even when many in society and the church looked down on African Americans.

Throughout the 19th century, the Oblate Sisters taught the children of slaves and former slaves how to read the Bible. They went on to teach in schools, work in parishes, care for the sick and labor in other ministries in the United States, Cuba, Costa Rica, the Dominican Republic and parts of Africa.

“We rejoice that one of yours – one of ours – was conscious of the presence of God in our midst,” said Archbishop O’Brien, speaking to a crowd of about 100 who gathered in the chapel of the Oblate Sisters’ motherhouse for a jubilant ceremony that included the singing of African-American spirituals.

“She was aware the Lord favors the humble,” Archbishop O’Brien said. “Against all opposition and threats, she dedicated herself to rejoice in the Lord.”

The archbishop urged the sisters to “persevere in prayer” that more women will step forward to follow in the footsteps of Mother Lange and dedicate themselves to the service of others as Oblate Sisters of Providence.

There are currently nearly 100 women ministering as Oblate Sisters of Providence.

During the service, supporters of the canonization cause read a few of the letters from those claiming to be healed through Mother Lange’s intercession. Sister Virginie Fish, O.S.P., director of the Mother Mary Lange Guild, read from the letter of a Filipino woman who prayed to Mother Lange that a tumor on her back would be non-cancerous.

When the woman lay on the operating table about to have the tumor removed, the surgery was canceled when her doctor could not feel the tumor and radiological tests showed it had disappeared.

“The writer gives thanks to God for this gift of healing,” Sister Virginie said.

Sister Madeline Swaboski, I.H.M., a member of the Mother Mary Lange Guild Board of directors, read from the letter of a Cuban woman who believes her 93-year-old mother was cured of a head injury after the daughter prayed to Mother Lange.

Sister Mary Alice Chineworth, O.S.P., former superior general of the Oblate Sisters of Providence, offered her own testimony of how she didn’t need recommended eye surgery after an earlier surgery left her blind in one eye. She had prayed to Mother Lange and when the day of the surgery arrived, she could see out of both eyes.

“I stand before you with perfect vision,” Sister Mary Alice said with a smile.

The Archdiocese of Baltimore completed an investigation of the sanctity of Mother Lange in 2004, sending its findings to the Congregation of the Saints in Rome. Father Wieslaw Spiewak, C.R., the Vatican’s postulator for the canonization cause, will review the findings before submitting them to theologians for scrutiny.

Father John Bowen, S.S., who was appointed vice postulator for the cause a month ago, told The Catholic Review the postulator is currently working on three canonization causes including Mother Lange’s. He is expected to complete one of them by July, Father Bowen said, which means Father Spiewak will have more time to work on the Mother Lange cause in the fall.

Therese Wilson Favors, archdiocesan director of African-American ministries, said the beatification and canonization of Mother Lange would be an answered prayer for the African-American community and the entire city of Baltimore.

“It would bring tremendous hope for the people of Baltimore who have been asking her to sojourn with us,” Ms. Favors said. “It would be a blessing for us all.”