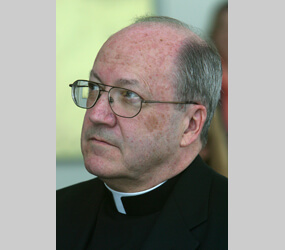 WASHINGTON – Monsignor William A. Kerr, whose work as a priest included college president, vocations director and spiritual counselor to convicted murderer Ted Bundy, was buried at Roselawn Cemetery in Tallahassee, Fla., May 19 following his funeral Mass.

Bishop John H. Ricard of Pensacola-Tallahassee celebrated the funeral Mass at the Co-Cathedral of St. Thomas More in Tallahassee for the 68-year-old priest, who suffered a stroke May 3 while celebrating Mass in the co-cathedral. He died 10 days later at Tallahassee Memorial Hospital.

Monsignor Kerr was executive director of the Claude Pepper Center for Intercultural Dialogue at Florida State University and president of John Paul II Catholic High School in Tallahassee at the time of his death.

He also had served as executive director of the Pope John Paul II Cultural Center in Washington, 2004-06; president of LaRoche College in Pittsburgh, 1992-2004; and vice president for university relations at The Catholic University of America in Washington, 1984-92.

At LaRoche, he established the Pacem in Terris Institute, a scholarship program for outstanding college-age women and men who are from conflict, post-conflict and developing regions of the world and agree to return home to build or rebuild their nations.

“Monsignor Kerr was a dynamic, committed priest and global citizen who ministered to the weak and the powerful in equal measure,” said a death notice on the Web site of the Diocese of Pensacola-Tallahassee. “He saw the greatness in each person with whom he interacted and helped them believe in their own greatness.”

In 1978, then-Father Kerr administered the last rites to a woman killed in her sorority house near the Florida State campus. Bundy, who was sentenced to death for that murder and several others, sought out the priest for spiritual counseling before his January 1989 execution in Florida’s electric chair.

Born Sept. 22, 1940, in St. Louis, William Aloysius Kerr Jr. was ordained a priest of the St. Louis Archdiocese March 26, 1966, by Cardinal Joseph Ritter. He later became incardinated in the Diocese of Pensacola-Tallahassee.

Named a monsignor in 1980, he held a bachelor’s degree from Cardinal Glennon College Seminary in St. Louis; a licentiate in theology from Catholic University; a master’s degree in international affairs from the Johns Hopkins University’s School of Advanced International Studies in Washington; and a doctorate in American history from Florida State.

After serving in two parishes in the St. Louis Archdiocese, he was associate pastor and administrator of St. Thomas More Parish in Tallahassee – then part of the Diocese of St. Augustine – from 1971 to 1975.

When the Pensacola-Tallahassee Diocese was created in 1975, St. Thomas More became a co-cathedral, where Monsignor Kerr served as rector until 1984. He also served as the new diocese’s first director of vocations.

He also was Catholic campus minister and an adjunct faculty member at Florida State from 1971 to 1984.