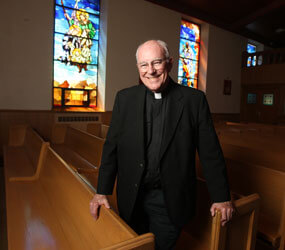 As Monsignor Paul G. Cook reflects on 50 years of priesthood, the St. Joseph, Cockeysville, pastor can’t help but think of all the lives he has touched.

“It’s amazing,” mused the soft-spoken, white-haired priest with wire-rimmed glasses who was ordained May 23, 1959. “Weddings, funerals, baptisms – there were hundreds, and that runs into the thousands. I tell the seminarians, ‘Priests can do all kinds of things, but I really feel priesthood is about being in a parish. Then you’re with your people.’”

At 76, Monsignor Cook has spent 32 years – two-thirds of his priesthood – at the 3,400-family parish of St. Joseph. On May 31, he celebrated his 50th jubilee at the Baltimore County parish, along with family friends and some 30 fellow priests.

“The thing that has been so gratifying personally is that we’ve seen more than 40 seminarians come through here for pastoral work,” said Monsignor Cook, his blue eyes lighting up. “It’s a great source of ongoing rejuvenation. It’s been a great place for men to learn.”

As a child, Monsignor Cook attended St. Bernardine School in west Baltimore where, along with his younger sister and parents, he was active in the parish. His sister is a Sister of Notre Dame de Namur serving in Washington, D.C.

“Everybody was so supportive then,” said Monsignor Cook. “The sisters were supportive as was the pastor, who was Monsignor Louie Vaeth at the time.”

Monsignor Cook said he became close to a priest at St. Bernardine, the late Father James Fay, who taught him how to drive and play golf.

“In those days vocations were a wonderful thing,” Monsignor Cook said. “Boy, if there was the thought of a vocation, people were really excited.”

Monsignor Cook went on to attend the Catholic University of America in Washington, D.C., and his first assignment as a priest was at the Basilica of the National Shrine of the Assumption of the Blessed Virgin Mary, Baltimore. From there, he went on to serve at the Cathedral of Mary Our Queen, Homeland, which is also celebrating its 50th anniversary this year.

Monsignor Cook eventually became a full-time director of the archdiocesan CCD program, while helping out at St. Rose of Lima, Brooklyn, and Sacred Heart in Glyndon. He also served for four years as secretary of education for the Archdiocese of Baltimore.

“In 1852, this used to be the only church between St. Mary of the Assumption, Govans, and Pennsylvania,” said Monsignor Cook.

The parish was divided a number of times as new churches were built. Through more than three decades, Monsignor Cook has been there to serve the changing and growing community.

“Some people would think that (being a priest) is always the same, day in and day out, and my sense is that it’s never the same,” said Monsignor Cook. “There are constantly new people and even though their problems may be like problems other people have had, they’re different because these are different people.”

When thinking about his five decades of priesthood, Monsignor Cook said, “It goes by very quickly.”

“It’s a day at a time, and they simply just add up and you don’t feel them,” he said. “Periodically you stop and take a look and you can realize how many days have gone by, how many years have gone by.”

He has enjoyed serving in a thriving parish.

“We have a school with 375 registered for next year and literally 800-900 volunteers,” Monsignor Cook said.

“One of the real pleasures is the number of volunteers you have, and you get to know them best because you’re working with them,” he said.

His advice to new priests is to give a homily every day when they celebrate Mass.

“You are automatically spending a lot of time praying and reflecting over Scripture,” he said. “So if you do that and you do that faithfully over the years, you get to know Scripture like we never would have known it in the past. I think that is one thing that is really very key.”