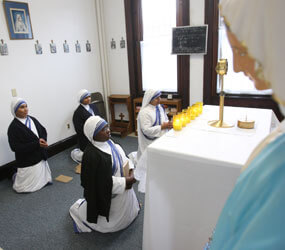 The Missionaries of Charity, the order of religious women founded by Blessed Teresa of Kolkata, came to Baltimore in 1992, establishing the “Gift of Hope” in the former St. Wenceslaus Parish convent.

They ministered to the city’s neediest, those who have fallen through social safety nets, including impoverished HIV/AIDS patients. It didn’t take long, however, for the sisters to notice that another group needed a dose of hope, an injection of love and a taste of joy: the neighborhood’s children.

After hearing children awake and running the streets late at night, the sisters reached out to them, and their apostolate with them has grown as vital as their work with the sick. The sisters currently teach the Good Shepherd catechism on Saturdays and Sundays at Our Lady of Pompeii Church in East Baltimore.

Led by Sister Roberta Deitz, the sisters teach the parish’s growing number of Hispanic children, nurturing their ability to fall in love with God through songs, parables, age-appropriate Scripture readings, silence, formal and informal prayer, practical life exercises and play. They also teach the children to memorize common prayers, such as the “Our Father,” “Hail Mary,” and the profession of faith.

“The children are receptive, and it’s important that we bring them to Jesus because they are the future,” said Sister Vineeth Tom, the superior at Gift of Hope.

The Missionaries of Charity also offer a summer Bible camp for neighborhood children 5-12, serving as many as 60 in recent years. It includes breakfast and lunch, and the sisters teaching manners and life skills such as cooking, setting a table and hosting a dinner.

With a stalwart volunteer corps, the sisters use field trips and outings to expose the children to places they may not otherwise visit, such as the zoo or parks. Last summer, a wealthy volunteer opened his property in northern Baltimore County to the sisters and the children.

“It was awesome, to see these urban kids running around in open fields,” Karin Barnowe said.

Inspired by her volunteer work at Gift of Hope, Barnowe, 36, recently converted to Catholicism. Now in formation along with 15 others as a Lay Missionary of Charity, Barnowe has volunteered at the Bible camp for a few years.

“It’s wonderful to see how the kids grow in Christ,” Barnowe said. “They can be rambunctious, get into fights. Everything the sisters do, they do with prayer and love. The sisters are always very kind with the children, but they are tough. The children learn quickly that they aren’t going to get away with much, that the sisters mean business.”

Resembling an abbreviated form of the summer Bible camp, an after-school program the sisters established in the former St. Wenceslaus School was their longest-running program until 2010, when it was temporarily discontinued due to redevelopment in the neighborhood, just north of The Johns Hopkins Hospital.

“Some of the families with children were moved out of the neighborhood while their houses or apartments are being repaired,” Sister Vineeth explained.

When the families return, the sisters fully expect to resume their after-school activities. In the interim, the remaining children press the convent doorbell after school, rushing inside to spend time with the sisters.

“Many children come from difficult circumstances,” Sister Vineeth said. “Maybe their parents are addicted to drugs, or there is something else going on in the family, that the children are neglected.

“One girl, only 9 years old, tried to commit suicide three times already. She was in the hospital for a while, but she now is home, and she comes and sits quietly in the chapel. At Christmas I asked her if she wanted to go to the Christmas Mass with us, and she did.”

The sisters’ success with the children is rooted in prayer and unconditional love.

“When we visit the neighborhood families, the children follow us,” Sister Vineeth said. “First, they start off behind us, and before long, they come forward and are walking with us. And they give us all the updates. The children often know everything that’s going on in every house.”