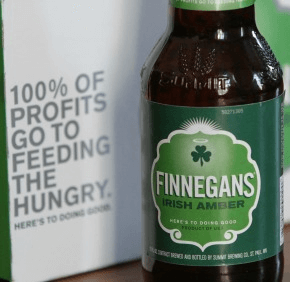 By Jessica Trygstad
Catholic News Service
ST. PAUL, Minn. – In the purchase and subsequent consumption of what’s playfully dubbed “Irish Holy Water,” fans of Finnegans beer are feeding the hungry in Minnesota, some of whom were past clients of Catholic Charities.
Since its beginning 15 years ago, the Minneapolis-based beer company has centered its business model on the common good, contributing 100 percent of its profits to alleviate hunger.
Finnegans’ formula is simple: it starts with “good beer” found at local restaurants, bars, and liquor stores and puts that profit into the Finnegans Community Fund, which buys fresh produce from local farms. Then, Finnegans donates the fresh produce to food shelves to be distributed to people in need. By paying for the produce at market-rate, Finnegans provides farmers with an income and people in need with healthy food.
“I know that in the last decade, we’ve seen the number of people going to food shelves double,” Finnegans founder and CEO Jacquie Berglund said. “The largest growing segments are military families and college students. We need to work harder and have our citizens meet their basic needs.”
Up until two years ago when Catholic Charities of St. Paul and Minneapolis stopped operating food shelves, it had benefited from Finnegans’ outreach.
With the notion of “we’re here to serve others,” Berglund said the company is proof that a small group of committed people “can do anything.” In Finnegans’ case, the staff of five has created and now runs a social enterprise that is self-sustainable, Berglund said.
Next to the Newman’s Own brand, Finnegans is the second longest-running company in the country that has a 100 percent profit business model.
Because of government regulations, Finnegans is really two companies: the for-profit company that owns the brand and pays the bills, and the nonprofit company that donates all its proceeds, more than $500,000, to anti-hunger efforts since its start in 2000.
“The most important thing to me is creating community wealth and giving it back,” Berglund told The Catholic Spirit, newspaper of the Archdiocese of St. Paul and Minneapolis.
Finnegans also is celebrating one year of its Reverse Food Truck. Rather than serving food, the truck collects food and monetary donations, further supporting Finnegans’ mission to “put hunger in the rearview.”
In addition to work in Minnesota, Finnegans partners with farmers and distributes in Wisconsin, North Dakota, South Dakota, and soon Iowa.
From the “holy water” reference to its haloed shamrock logo, Finnegans adopts from Catholic culture, thanks, in part, to the Catholics behind its advertising.
The company’s philanthropic mission led Tom Moudry and his team at Martin Williams advertising agency in Minneapolis to offer advertising work pro bono.
“We have been able to find a very fun tone for the personality of the brand,” Moudry, chief creative officer, said. “When you have an Irish amber beer, and you’re selling it in the Twin Cities, we’ve found there’s an opportunity for benevolence and leprechaun wit.”
Moudry, who is a parishioner of the Basilica of St. Mary in Minneapolis, said the Catholic component of that wit is more prevalent the closer it gets to St. Patrick’s Day each year.
In advertising Finnegans’ Reverse Food Truck, Moudry, who has brothers and uncles who are priests, pointed to the slogans: “Just a food truck. Like Mother Teresa was just a really nice lady” and “Give us this day your daily bread … or canned goods … or instant mashed potatoes.”
“We’ve had a mission to take her (Berglund’s) mission of 100 percent giving to local working charities to another level,” Moudry said.
Berglund explained the paradox of the company. “We are a beer company – it’s fun and it’s social – so bringing that social piece, which can be a social evil, to make it (beer) into something good.”
Moudry said Berglund has been an inspiration to the Martin Williams staff not only through her service, but also by “using a beer brand in such a charming way that allows people to laugh and have fun. But the mission is not lost,” he said, adding that the agency only takes on pro bono work if they trust that the client is helping to make the world a better place.
Trygstad is assistant editor of The Catholic Spirit, newspaper of the Archdiocese of St. Paul and Minneapolis.