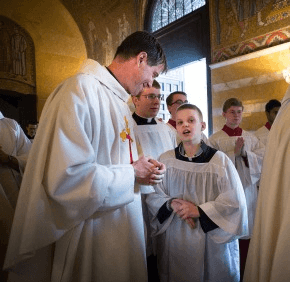 When it came time for 11-year-old Brett Haubrich of St. Mark School in Affton to make his wish, he not only listed none of those things but had no request at all.

“He didn’t want anything,” explained his mother, Eileen. “They had to keep asking him, ‘What would you like to do? Do you want to meet anybody? What do you want to be when you grow up?’“

The answer to the last question became part of his wish – what Make-A-Wish calls “wish enhancement” to complement the main wish. Turns out he wants to be a priest, a doctor or an engineer, in that order.

So, on Holy Thursday, at the invitation of St. Louis Archbishop Robert J. Carlson, Brett took his place beside the altar at Cathedral Basilica of St. Louis as “Priest for a Day.”

He also joined Archbishop Carlson for two meals; a luncheon with archdiocesan priests and deacons after the chrism Mass and a dinner with seminarians at the archbishop’s residence before the evening Mass.

Best of all, he wore a collar provided by a seminarian from Kenrick-Glennon Seminary in Shrewsbury.

When asked about his favorite part of the day, Brett was unequivocal in his answer.

“The whole thing,” he said as he waited for his dad, Conrad, near the Cathedral Basilica sanctuary with his mom and older sister Olivia after the chrism Mass. “It was really neat for them to let me do this stuff.”

And cool, too – a term he used often in describing the day.

His actual wish is cool, too.

“Eating mangoes on a beach,” his mother said. That trip will come later.

“For years, he has loved the Mass and been religious,” said his mom. “He has such a good heart. He’s a very caring boy.”

Brett is the second oldest of Eileen and Conrad’s four children. He has served at his school church and at his parish, St. Martin of Tours in Lemay, which is visible from the back door of his house only a short walk away.

He likes the smell of incense, enjoys confession and likes “Communion, and the songs, too.”

Communion – the Eucharist, the living presence of Jesus Christ – stands out. “I like receiving the body and the blood” of Christ, he said, simply.

When Father Nick Smith, master of ceremonies at the cathedral, was asked if Brett could serve at a Mass his initial response was “no way,” followed quickly by “we can do way better than that.”

Sure enough, they did.

Father Smith suggested that Brett serve the two Masses on Holy Thursday – the chrism Mass, which is for priests, and that night’s Mass, “which is always about the Eucharist.” Archbishop Carlson, who was with the priest when he got the request, immediately joined in with other ideas for the day – having Brett attend the seminarians’ dinner and participate in foot washing.

Father Smith prepared an itinerary and delivered it in person to Brett along with a letter signed by Archbishop Carlson asking for Brett’s help at the Masses.

“I handed it to him, and when he got to the first line, ‘I’m making you a priest for a day,’ his eyes got as big as half-dollars,” Father Smith said.

Brett admitted to being a little nervous heading into Holy Thursday, but the events went off like clockwork. Wearing the collar, Brett processed down the center aisle with priests, deacons and seminarians at the chrism Mass – at which Archbishop Carlson blessed the oils to be used throughout the archdiocese for sacraments for the next year – and took his spot near the altar.

Or as Archbishop Carlson put it: “He did pretty well.”

Luecking writes for the St. Louis Review, newspaper of the Archdiocese of St. Louis.