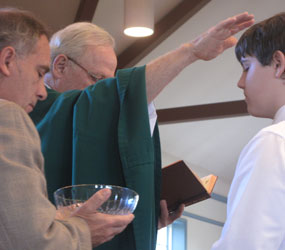 PARKTON – As the 2010-11 school year concluded, Greg Baum ran into Jack Buchner’s office at Our Lady of Grace Parish.

The then-seventh-grader at the parish’s school exclaimed, “Dr. Buchner! I got a 94 on my religion final!”

Buchner, the parish’s pastoral associate for faith formation, was thrilled.

“I was so happy that Greg not only knew a lot about Jesus and his church, but that he wanted to share that enthusiasm,” said Buchner, who had been preparing Greg to be confirmed and receive his first holy Eucharist.

Greg joined the full communion of the faith Oct. 11 during a school Mass, becoming the second member of his class, after Austin Mack, to do so. Both transferred to Our Lady of Grace before last school year.

“To have a second middle-schooler make that decision, it’s just remarkable,” principal Byrdie Ricketts said. “It makes me joyful. You have to be happy for these guys.”

Greg’s receiving of the Communion host from Buchner was a moving moment for many in the church.

“It felt amazing,” Greg said. “It actually felt like Jesus was present with me.”

Proudly watching on were his parents, Sharlene and Michael. Catholic Sharlene wiped away tears of pride. Michael is Jewish, but felt that Greg’s pursuit of Catholicism showed maturity. He was as moved as his wife during the Mass.

“We all feel really at peace at church,” Michael said. “When we came to OLGS, we hoped he would be able to make his own decision.”

Buchner was delighted more than a year ago to hear that middle school boys were considering joining the faith.

“I was doubly honored that they asked me to help them,” Buchner said. “I found them to be so open and aware. I have this overwhelming sense of gratitude for working with them.”

During study sessions, the boys were able to peel back layers of the faith and, on their own, decided that they wanted to go further and be confirmed. Buchner proved to be an inspiration.

“He really helps you learn how to be a Catholic,” Austin Mack said.

Austin received the same sacraments as Greg at the Easter Vigil. His family is a mix of Catholics and Methodists and his choice of faith came from his school religion classes and Masses.

“It really opened my eyes and made me see God,” Austin said.

When Greg transferred to Our Lady of Grace from a non-Catholic private school, Greg was open to change. Sharlene and Michael saw a nurturing environment that stimulated their son spiritually and academically.

Sharlene had simple hopes for Greg after the Oct. 11 Mass.

“That he makes good decisions and that his religion will offer him comfort and strength,” Sharlene said.

Greg was able to make a life-altering decision thanks to what he has learned.

“It’s important,” Greg said. “When you learn about the faith, you become closer to God and to Jesus. You feel like you’re more a part of something. It gives you strength and hope.”

Sulpician Father Robert Leavitt, the former president and rector of St. Mary’s Seminary and University in Roland Park and a France Merrick University professor there, confirmed Greg during the school Mass and thanked him for his display of faith.

“It’s my experience that when some people do what he just did when they were a little bit older, they take it much more seriously than we do just growing up in the church,” Father Levitt said. “I congratulate you on your decision.”

Greg reflected on his moment of confirmation. He wasn’t nervous or shaking, but at peace.

“I was thinking about what my future was going to be like after I’ve done this,” he said.