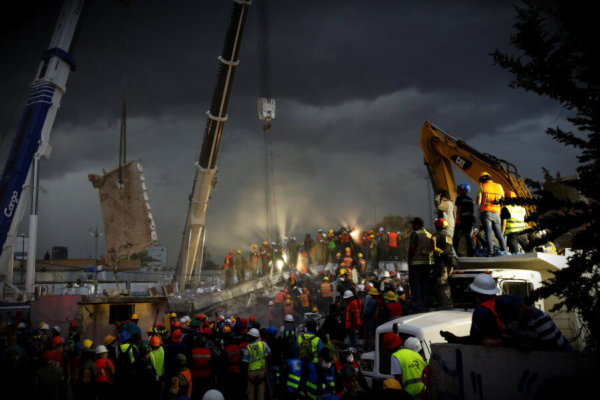 Rescue workers search for survivors Sept. 20 at Enrique Rebsamen school in Mexico City. At least 21 children and four adults died in the school collapse, and hundreds of others were killed following the Sept. 19 earthquake. (CNS photo/Carlos Jasso, Reuters)

MEXICO CITY — Teresa Hernandez considers it a miracle. Her uncle and nephew were trapped under the rubble of an apartment building in northern Mexico City after the Sept. 19 earthquake and managed to get out.

On Sept. 28, she brought a small statue of St. Jude Thaddeus to celebrations at historic St. Hippolytus Church to give thanks. The 28th of each month is set aside to celebrate the life of the saint of difficult and impossible causes in parts of Mexico.

“I always come to give thanks” on the feast day, she said. “Thanks to God they’re still with us.”

Devotion to St. Jude Thaddeus has mushroomed in Mexico City during the past two decades, spreading through word of mouth among the most downtrodden in the Mexican capital, especially those suffering discrimination and injustice.

The monthly observance normally attracts thousands of devotees to the St. Hippolytus Church, which dates to 1531. The church became a shrine for St. Jude Thaddeus devotees after Claretian missionary priests placed an image of the saint in it and the saint’s influence spread in Mexico City, mostly through word of mouth.

For some, especially young people, “it became fashionable” for a time, said Claretian Father Alejandro Ceron.

Some come to seek intervention. Other seek acceptance, including young people with additional problems, who sometimes show up high, “but we don’t turn away anyone,” Father Ceron said.

A few people bring statues of other “pseudo saints” such as Jesus Malverde, a figure from Sinaloa state popular with narcotics traffickers, and the skeletal Santa Muerte (Holy Death), which has been condemned as satanic by the Catholic Church, but which has gained a strong following since the 1990s.

“People are allowed to enter, but their statues and images are not,” Father Ceron said. “There’s a lot of confusion. People involved in these beliefs try to associate (the pseudo saints) with St. Jude Thaddeus.”

Most, though, come to give thanks for what they consider miracles from a saint seen among devotees as making the impossible occur.

“I made a promise to come here every month,” said Marco Antonio Morales, a small-business owner who prayed to St. Jude Thaddeus for intervention after being arrested on what he insists were bogus drug and gun charges. “Everything worked out so I’m going to come here more often.”

A few said the earthquake motivated their trips to the feast day celebrations.

“I’m here to give thanks for having one more month here, for being alive,” said Clemente Chavez, a restaurant manager, who was in one of the harder hit neighborhoods of Mexico City when the quake hit and luckily on the ground floor of a building.

The magnitude 7.1 earthquake near Mexico City and a Sept. 7 magnitude 8.1 earthquake in southern Mexico have claimed more than 400 lives and damaged or destroyed an estimated 150,000 homes.

Mexicans have responded to the earthquakes with generosity and solidarity. The response has been so overwhelming that some collection centers reported receiving too many donations and offers of assistance.

Meanwhile, some people have turned to faith. The Archdiocese of Mexico City reported increased attendance at Mass since the earthquakes.

“It’s a natural reaction,” said Father Hugo Valdemar Romero, Archdiocese of Mexico City spokesman. “Many people have sought comfort and a refuge in parishes,” he explained, saying some 96 churches in Mexico City were damaged, while 10 were “seriously damaged.”

At St. Hippolytus, Father Ceron said crowds on the feast day were lighter than usual during Masses celebrated from morning until night. Those arriving since the earthquake are often seeking solace and spiritual accompaniment.

“People are coming to be heard, to express their fears. Father Ceron said. “They say things like they’re scared … they’re sleeping in their clothes.”