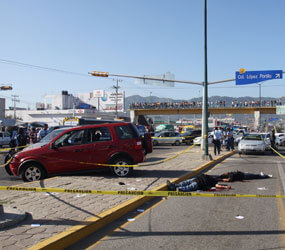 Durango state judicial officials said the 10 young people, ages 8-21, apparently failed to stop for a false checkpoint established by presumed drug cartel members March 28. At least 40 shots were fired and a grenade was tossed at the victims, who included four siblings.

They had traveled in a pickup truck from their communal farm to get bursaries awarded through a conditional cash-transfer program that supports 5 million of Mexico’s poorest families.

“We tremendously regret that this involved children. This is what outrages us the most,” said Father Victor Manuel Solis, spokesman for the Archdiocese of Durango. He said the archdiocese was “making a permanent call for peace.”

The slayings were yet another example of the increase in the number of young people who have been caught up – inadvertently or not – in the cartel violence that has claimed more than 19,000 lives nationwide since December 2006.

Father Solis said security concerns from church officials and parents forced the suspension of a Holy Week missionary program for more than 3,000 students in Durango and the neighboring state of Chihuahua. Both programs had existed for more than 20 years. The priest said Easter activities would not be canceled.

The newspaper Reforma, citing information from Mayor Daniel Delgado Meraz of Pueblo Nuevo, where the slayings occurred, reported that an unidentified Catholic priest, checking on security conditions in the region for the mission, was threatened.

Mexican Interior Minister Fernando Gomez-Mont told reporters March 29 the Sinaloa cartel and a group known as Los Zetas – formerly the armed wing of the rival Gulf cartel – have been fighting over control of the area.

“They used to be small in numbers … and well identified,” Archbishop Hector Gonzalez Martinez of Durango said of early participants in his state’s drug trade. Now, “the shrewdness, malice and wickedness of those provoking insecurity is growing.”

Earlier, Catholic officials in other areas hit by drug-cartel violence said they have no plans to alter or cancel Holy Week events.

They also called on Catholics to work toward spiritual renewal during Holy Week, instead of dedicating the popular Mexican vacation period to leisure activities.

Archbishop Felipe Aguirre Franco of Acapulco – the destination for hoards of Mexico City residents during Holy Week – called on visitors to the coastal city to “not fall into excesses (and) not participate in pagan festivals and drunkenness that, instead of honoring the passion and death of Christ, desecrate the sacred and truly Holy Week.”

Palm Sunday activities kicked off Holy Week as violence attributed to the cartels escalated. The death toll has reached nearly 2,400 so far this year, the Mexico City newspaper Reforma reported, and innocent bystanders increasingly have been caught in the conflict.

In Acapulco, which has a population of about 725,000, 32 deaths were recorded during the three-day weekend ending March 15. The head of one decapitated victim was left in front of a parish. Still, Holy Week activities would proceed as planned, said Father Juan Carlos Flores, spokesman for the Archdiocese of Acapulco.

In the northern city of Monterrey, Catholic officials also said they would not cancel Holy Week events, even though the region has been plagued by events such as presumed cartel members hijacking vehicles to block expressways and the early morning deaths of two graduate students as soldiers chased criminals cutting through the campus of an elite university.

In Ciudad Juarez, where the violence has been most intense, the diocese planned a normal schedule of Holy Week events, although some of the hours were adjusted to coincide with daylight hours, said Father Hesiquio Trevizo, diocesan spokesman.

The diocese, which borders Texas near El Paso, is using the week to launch an initiative to pass out 3 million rosaries.

“We all must reflect … and pray for peace because apart from the sociological and economic conditions, there’s a situation in which sin exists,” Father Trevizo said.

“Sin is not considered in our public and social policies, so we need for people to ask God … that our society regains a sense of sin,” he said.