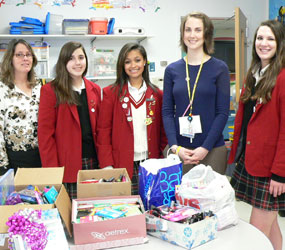 Like many little sisters, Stephanie Rapazzo would go to her brother Tim’s baseball games when she was younger. It might not have always been the Mercy High School junior’s favorite activity, but it’s up there now.

Tim, 21, a junior, was red-shirted during the 2009 campaign after he was diagnosed with leukemia and spent months in and out of The Johns Hopkins Hospital’s Pediatric Oncology Center. He’s now in remission.

“He’s worked really hard to get back and I’m proud of him,” Stephanie said. “It’s amazing. I feel like, finally we got through it.”

The once muscularly built infielder is slowly returning to physical form.

“The whole thing made us closer,” Stephanie said of the family’s emotional experience. “Instead of bringing us all down, it brought us up.”

Stephanie, a parishioner of Hydes’ St. John the Evangelist, would visit the oncology unit when it was allowed by the hospital’s staff. Seeing her brother solider through his illness was emotionally taxing. Each time she walked the halls, she saw the faces of other teenagers receiving treatment. She knew they were missing critical high school experiences.

“They sometimes came out to take a walk, but it wasn’t like they were running around and playing games,” Stephanie said.

Through her own brother’s experiences, she saw that cancer patients become dehydrated after treatments, often getting chapped lips. Girls, she said, can’t wear makeup during treatments, but can apply nail polish.

“I knew that when my brother was there (for treatments) and they flushed the lines that were connected to him, he could taste the medicine and it tasted really bad,” Stephanie said. “He would have to chew gum to get rid of it.”

She knew others were going through the same painful process.

“I wanted to help,” she said. “It could happen to anyone.”

She conceived the idea of doing a project during Spirit Week at Mercy where she would collect lip balm, gum and nail polish for John Hopkins oncology patients. In order to build awareness for the project, she told her brother’s story to Mercy students and staff through announcements and lunch room speeches.

“I almost started crying,” Stephanie said. “All the classrooms went completely silent. It brought up way too many memories.”

By the end of the collection, there were five full boxes of the small items to deliver to Johns Hopkins.

“They went over my expectations,” Stephanie said. “They’re all really nice people. They all have this urge to help someone or something.”

This year, her brother returned to the baseball field, and in his first at bat, everyone on the team and in the stands gave him a standing ovation.

“It was a really special moment, as far as baseball games go,” said Steve Duncan, assistant baseball coach for Hopkins.

Stephanie hopes to hold a bone marrow drive soon and wants to assist Johns Hopkins in any way she can.

“I never want to stop helping,” she said. “They helped my brother get his life back and I want to give back to other kids and help them get a chance. People are not going to stop getting sick, so why should I stop helping them?”