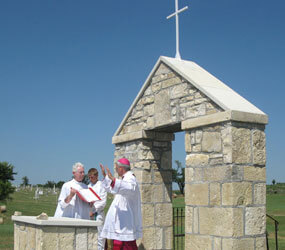 CHAPMAN, Kan. – The loss of St. Patrick’s Chapel in Chapman during the June 2008 tornado was heartbreaking, but a memorial that stands in its place is a reminder of its significance.

St. Patrick’s Chapel was the first Catholic church to be built in what would become the Diocese of Salina and was a tangible reminder of the town’s Irish heritage.

The June 11 tornado changed that in an instant. While the present-day Catholic church, St. Michael’s, was spared significant damage, the chapel and parish cemetery located a mile northeast of town took a direct hit. The chapel’s hand-hewn limestone blocks were scattered like a child’s toys, and pioneers’ headstones were toppled or broken apart.

The Kansas Insurance Department reported $52 million in property damage from the storm, which killed one person. The town’s three other churches and the three public school sites were demolished. More than 60 homes were destroyed, and numerous others were damaged.

“But we knew the cost would be prohibitive,” she said. “We had to let emotions die down and let the Holy Spirit work. And pretty soon, the solution came out.”

She said a rough estimate to reconstruct the chapel was $150,000 “for something we use once a year.” Parishioners then agreed that a memorial would make more sense, and it was suggested to use stone salvaged from the original building.

Parishioner Terry Root sketched some ideas, and Campbell forwarded those to Father Frank Coady, who as diocesan director of liturgy consults on the design of new churches and renovations.

The resulting design, Father Coady said, reminds him of ruins of churches in Ireland, an appropriate image next to a cemetery whose headstones bear the names of Irish immigrants who settled the area.

The memorial’s concrete floor is the exact dimension and on the same location of the old church. Two gabled walls on either end give a sense of the original structure.

Although new capstones were used, the walls, benches and an altar are built from the original stones. In addition, the original iron handrails remain and bear the marks of the destructive storm.

“We didn’t straighten them. That’s our reminder of the tornado,” Campbell told The Register, newspaper of the Salina Diocese.

In one way, she said, the memorial is an improvement over the old chapel.

“Because it’s an open structure, people can come and go any time. It’s a prayerful place. You couldn’t do that before because it was locked,” she said.

The chapel has been the site of an annual Memorial Day Mass, and those who return to the cemetery for that service gathered this year at the newly finished memorial.

Insurance coverage paid for the cost of building the memorial and restoring a large crucifix in the cemetery that was toppled, as well as repairs for the damage to St. Michael’s in town.

In fact, enough donations came in that the parish had money left over after the repair work was completed. The parish donated the excess money to the three churches in Chapman that had to be rebuilt.

“We’re the only church that didn’t get destroyed,” she said of St. Michael’s, and she felt strongly that the donated funds should go toward some type of tornado recovery rather than other parish expenses.

St. Patrick’s was one of five stone churches built by the pioneer missionary priest, Jesuit Father Louis Dumortier. He bought the land in 1859 and celebrated the first Mass inside the church in December 1864.

Only one of Father Dumortier’s stone churches remains. The oldest portion of the parish hall at St. Patrick’s in Ogden is the original 18-by-30-foot church built in 1865-66.