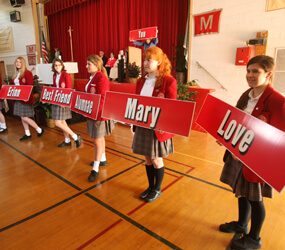 When Mary Catherine Bunting was asked why she would give $3 million of her money to Maryvale Preparatory School, she looked as though she didn’t have an answer.

It was just something the 1955 graduate of the Brooklandville school felt the need to do when she was approached to be part of the “In Her Name – The Campaign for Maryvale” capital fundraising effort.

After about a year of private work, the all-girls school announced the $12 million campaign at a May 8 Mass and ceremony, which also included the annual May crowning of a statue of the Blessed Virgin Mary.

“It’s great to see how the school has grown since I had a class of 12,” Ms. Bunting said with wonderment. “They had a good program that really helped you learn. Without that background, you can’t go anywhere.”

It is believed to be the largest, individual donation to an all girls school by analumna in the Archdiocese of Baltimore

Maryvale has already received $8 million in the drive. Ms. Bunting, the granddaughter of the inventor of Noxema skin cream, worked with Bill and Maria McCarthy to launch the movement.

The campaign is personal for the McCarthys. Their daughter was a freshman two years ago when she died of a form of bone cancer.

During a post-Mass ceremony, students held up signs to signify who “her” is in the campaign.

“For Maria and I, it’s Erinn,” Bill McCarthy told students.

Bishop W. Francis Malooly of Wilmington, Del., formerly of the Archdiocese of Baltimore, celebrated the Mass.

“When I left Baltimore to trek north to Wilmington in September, I asked Archbishop (Edwin F.) O’Brien if I could continue one of my projects here in Baltimore- the Maryvale effort,” he said.

At the conclusion of Mass, the school celebrated the tradition of the May Crowning. May Queen Cecilia Volker, an eighth-grader at the school, walked with attendants Maeve Duffy and Rachel Higdon through a line of Maryvale students and placed a crown of flowers atop Mary’s head.

The entire school sang in unison, “O Mary, we crown thee with blossoms today, Queen of the Angels, Queen of May…”

The school, which serves sixth through 12th grade, will see major changes to its 103-acre campus. Maryvale will construct a more than 30,000 square-foot Humanities Building, which will include an auditorium, a lobby and a gallery space. The center comes with a $7 million estimated cost. About $2 million will go toward installing new artificial turf, a new softball field, three new practice fields and a track.

Another $1 million is estimated for the reorientation of the current main entranceway to allow for a smoother, safer arrival at school.

The school believes another $2 million will be spent on improving campus infrastructure with the addition of a new storm water management facility. Previously, fields at the school were unusable because of a lack of drainage.

The school expects to break ground in the fall and for the entire project to take 18 months. Sister of Notre de Namur Shawn Marie Maguire, headmistress of the school, said the additions are much-needed.

“I believe in the necessity of the campaign so much,” Sister Shawn Marie said. “I need the space so much. Mr. McCarthy said it’s going to succeed. Now that it’s public, it’s going to get there faster.”

Students were in awe of the project and of Ms. Bunting’s gift.

“We knew there was going to be a crowning of Mary, but we didn’t know this woman was going to give so much,” seventh-grader Elena McWright said. “I’m so excited to have a new field and a track. It’s so generous.”
To view more photos from Maryvale on the Catholic Review home page, select
Multimedia > Slide Shows