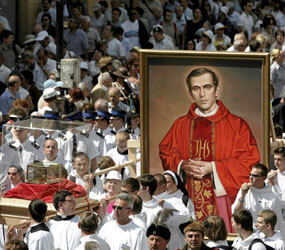 WARSAW, Poland – A martyred Polish priest was praised for standing against the oppressive forces of communism when he defended human rights in his sermons during a beatification Mass in the Polish capital.

More than 140,000 people listened intently during the June 6 ceremony in Pilsudski Square as Archbishop Angelo Amato, prefect of the Vatican’s Congregation for Saints’ Causes, recalled how Father Jerzy Popieluszko “did not yield to temptation to survive in this death camp” under communist rule.

“Father Jerzy … helped only by spiritual means, such as truth, justice and love, demanded freedom of conscience for citizen and priest,” Archbishop Amato said of the 37-year-old priest who was linked to the Solidarity labor movement and murdered by communist secret police agents. “But the lost ideology did not accept the light of truth and justice.”

“So this defenseless priest was shadowed, persecuted, arrested, tortured and then brutally bound and, though still living, thrown into water by criminals with no respect for life, who thus left him contemptuously to his death,” he said.

More than 3,000 priests and 95 bishops were among those who attended the ceremony.

Among those in attendance were Cardinal William J. Levada, prefect of the Vatican’s Congregation of the Doctrine of the Faith, church leaders from neighboring Lithuania, Belarus, Ukraine and the Czech Republic and former Solidarity leaders including Lech Walesa, past president of Poland.

The priest’s widowed mother, Marianna Popieluszko, who turned 100 on June 1, led the congregation in a rosary recital before the Mass.

The bound and gagged body of the Father Popieluszko was dredged from a reservoir on the Vistula River near Wloclawek Oct. 30, 1984, 11 days after his abduction while returning at night from a Mass in Bydgoszcz.

The Warsaw Archdiocese launched a canonization process in 1997 and sent its 1,157-page dossier to Rome in 2001. A decree recognizing Father Popieluszko as a martyr was issued by Pope Benedict XVI Dec. 19. His beatification is a major step toward sainthood.

In a message to the beatification Mass from Nicosia, Cyprus, Pope Benedict said the priest’s “sacrificial service and martyrdom” was a “special mark of the victory of good over evil” and offered an example to Catholic clergy and laity everywhere.

Speaking at the start of the ceremony, Archbishop Kazimierz Nycz of Warsaw said Father Popieluszko had suffered “severe punishment” for his religious devotion during military service in the 1960s but had rapidly attracted a following after being assigned to the Warsaw parish of St. Stanislaus Kostka in May 1980.

He added that the priest had been viewed as a “danger to the communist system” for his defense of human dignity and freedom of conscience, and calls for “reconciliation and peace,” and had also been aware the dangers facing him.

In his homily, Archbishop Amato said he had been reduced to tears during several visits to the crypt museum at the church, where Father Popieluszko lies buried with a rosary given him by Pope John Paul II, who prayed at his grave in June 1987.

He added that pictures of the dead priest’s “monstrously deformed face” had recalled that of the crucified Christ, which had also been stripped of “beauty and dignity.”

“What was the reason for this great crime? Was Father Jerzy perhaps a criminal, a murderer or a terrorist?” the prefect told the thousands at the Mass.

“Far from being any of these, Father Popieluszko was simply a faithful Catholic priest, who upheld his dignity as a servant of Christ and the church, and the freedom of those who, like him, were victimized and humiliated,” Archbishop Amato said. “But religion, the Gospel, human dignity and freedom were not concepts which suited Marxist ideology. This was why the destructive hatred of the great liar and enemy of God was unleashed against him.”

Father Popieluszko’s killing was widely credited with helping discredit four decades of communist rule in Poland, which ended in 1989.

A Polish Radio reporter at the Mass, Malgorzata Glabisz-Pniewska, told Catholic News Service the priest’s beatification would have a “profound meaning” for many Poles who knew him personally or heard his stirring sermons, but would be “less understandable” to young Poles with no experience of communist rule.

She added that former regime officials would be “uneasy” about the ceremony, as would fellow-priests and bishops who had “made compromises” with the communist system.

Meanwhile, an American Catholic, Judith Kelly, who traveled specifically to Poland for the Mass, said she was interested in parallels between Father Popieluszko and the late civil rights leader Rev. Martin Luther King Jr. She said she believed the priest’s story should be “a lot better known” among Western peace and justice campaigners.

A reliquary with fragments of Father Popieluszko’s remains, which were exhumed in April, was later carried in procession along a seven-mile route to the unfinished National Temple of Divine Providence in Wilanow in suburban Warsaw for burial in a newly dedicated crypt called the Pantheon of Great Poles.