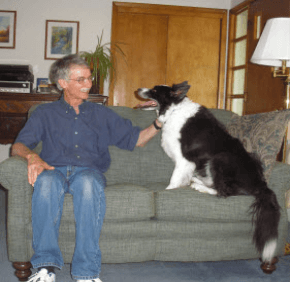 By Elizabeth Lowe
elowe@CatholicReview.org
Twitter: @ReviewLowe
Bill Collinge and his wife, Susan, typically begin their days walking Maggie, their beloved 11-year-old border collie.
“We usually walk her for half an hour or more,” said Collinge, 66, a theology and philosophy professor at Mount St. Mary’s University in Emmitsburg. “We get some exercise and talk to each other. It’s quality time with the dog, too.”
Barring unexpected health issues, the Collinges plan to one day get another dog, a commitment Collinge said would take him and his wife into their 80s.
“We’d have to be counting on living into reasonable health into our 80s,” he said.
Like the Collinges, other seniors, especially those 65 and over, may find owning a pet to be beneficial, according to psychology and gerontology experts.
“There is definitely literature that says older adults, especially older adults that have had pets, benefit from having them,” said Janet Simon Schreck, a gerontologist and executive director of Loyola Clinical Centers at Loyola University Maryland in Baltimore. “It has to do with social interactions. The pet offers them a partner or a companion, but also may take them into an experience where they socialize with others.”
In addition to companionship, pets – whether they are dogs, cats, rabbits or fish – can promote exercise and cognitive vitality, Simon Schreck said.
“It’s not an answer for everybody,” said Simon Schreck, who noted being a first-time pet owner later in life may be stressful. “It’s particularly beneficial for those who have had (pets) all along.”
Maggie, the Collinge’s border collie, isn’t their first pet. She is one of three dogs the family has owned since 1987.
Exercise, companionship and a sense of security are among the benefits the Collinges have experienced from having a dog.
Other benefits older adults may experience with pet ownership include a boost in their quality of life, satisfaction and a lesser chance for depression, said Caitlin Faas, assistant professor of psychology at Mount St. Mary’s University.
Selecting a smaller dog may be a better choice, Faas said, because they are typically less rambunctious than their larger counterparts and seniors often downsize to smaller homes.
According to experts, pet ownership for older adults is best when a long-term commitment to the animal can be made.
Janet Simon Schreck of Loyola Clinical Centers at Loyola University Maryland mentions five benefits for older adults who own pets:
·        Physical exercise
·        Managing conditions, such as high blood pressure and diabetes
·        Proper nutrition
·        Check against depression
·        Socialization
Also see:
World War II prisoner of war recalls capture, redemption
Grandparents range from traditional to hip when deciding what to be called
PrevNext