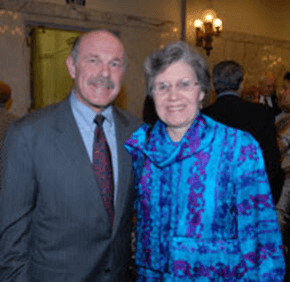 By Catholic Review Staff
Loyola University Maryland in Baltimore announced Sept. 19 that it has received a $1.75 million gift, one of the largest program-specific gifts in the institution’s history, from philanthropist Mary Catherine Bunting to form a new undergraduate program.
The funds will be used to create the Bunting Program in Peace and Justice Studies, Loyola announced. The program, expected to launch in 2014, will serve as a forum for speakers and events that work to raise awareness about global peace and justice issues.
“I am very grateful to Mary Catherine Bunting for this extraordinarily generous gift, which will allow our students and faculty to reflect systematically on the prospects for the peaceful resolution of personal, social and international conflicts,” Jesuit Father Brian F. Linnane, Loyola’s president, said in a statement.
The gift also funds an endowed faculty scholar in peace and justice studies to support the teaching and research of a faculty member to develop the program, Loyola announced. The gift provides funds to support interdisciplinary faculty workshops, the development of new courses and funds to support summer research fellowships and additional research opportunities for undergraduate students.
While some Loyola faculty members already teach peace and conflict resolution concepts, students in the peace and justice studies program will explore the causes and consequences of various forms of violence and conditions of peace from an interdisciplinary perspective, Loyola announced.
“We’re living in a time when wars start and small disagreements become bigger because people don’t respect one another,” Bunting said in a statement. “They don’t respect their differences and now the differences in everything – politics, culture, religion, race, gender – are magnified because the world is so global, so small.”
Bunting is a 1958 graduate of Mercy Hospital School and a 1964 graduate of Mount St. Agnes College in Mount Washington. Seven years later, Mount St. Agnes merged with Loyola.
She earned a master’s from the University of Maryland, School of Nursing and holds a doctorate of humane letters, honoris causa, from Notre Dame of Maryland University in Baltimore.
A retired certified nurse practitioner and former member of the Religious Sisters of Mercy, Bunting is the chairwoman of the Mary Catherine Bunting Foundation and director with the Bunting Family Foundation. A parishioner of St. Vincent de Paul in Baltimore, Bunting is a strong supporter of Mercy Medical Center.
Also see:
John Carroll students allegedly receive sexually explicit messages via social media
PrevNext