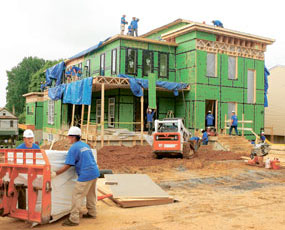 This is a corrected version of an article that appeared in the July 15 edition of The Catholic Review.

The College of Notre Dame of Maryland and Loyola University Maryland have changed lives in Baltimore for generations.

Now, they’re doing it to the extreme.

The television show is in town building a new home for girls participating in Boys Hope Girls Hope. Each of the colleges has committed more than $1 million, with tuition, fees, room and board being covered.

Loyola has awarded scholarships to eight young men, while Notre Dame is doing the same for seven young women.

Notre Dame has partnered with the organization since 2002, as administrators supported the program and held leadership roles as volunteers, mentors and board members.

Notre Dame will offer mentoring, peer support and career and academic counseling for the girls and their mothers through high school and college.

“These extraordinary young women are transforming their lives with the help of their mothers and the community,” Mary Pat Seurkamp, the school’s president, said. “Now they also have a home here at Notre Dame.”

Boys Hope Girls Hope opened a boys house in 2002 and purchased land in Northeast Baltimore to build a home for girls in 2009. Its boys contacted “Extreme Makeover,” which builds homes throughout the country for needy people, requesting to have a house built for the girls.

The boys impressed Loyola’s leaders with their initiative, selflessness, courage, determination and commitment to academics.

Jesuit Father Brian F. Linnane, Loyola president, said, “These are precisely the qualities we hope to see and to further instill in our students.”

Construction on the girls house began July 9. ABC has not announced when the show will air.

Boys Hope Girls Hope serves children in 40 homes in 16 cities and 100 percent of its graduated scholars from high school have also graduated from college since 1991.

Many of the Baltimore children come from environments dominated by drugs and violence, but who have caring families looking for positive solutions. Scholars participate in regular community events and have held jobs at Notre Dame to earn money for college and gain work related skills.

“We are blown away that Baltimore’s two great Catholic institutions have joined together to make a dream of a college education a reality for our scholars,” said Marcia Meehan, executive director of Boys Hope Girls Hope of Baltimore. “We’re going to have a much brighter future because of this.”