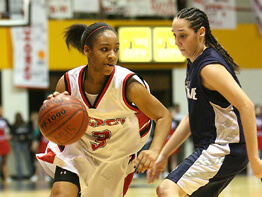 The smile on Mercy head coach Mary Ella Marion’s face as time expired for the 41st meeting of “The Game”, between Baltimore archrivals Mercy High School and The Institute of Notre Dame said it all. For Marion and her squad it was elation, pride and relief as the Magic upended IND for the second time this season while also ending a four-year skid at this annual gathering Feb. 2 at The Towson Center on the campus of Towson University.

It was a sea of red and a sea of blue that lined the hallways around the arena, while cheerleaders, dance troupes, father’s clubs, students, parents and alumnae were on-hand for the gathering of two catholic high schools rich in tradition and passionate about their school.

The game got off to a slow start but as the nervousness subsided, and the players got into their groove, a tenacious but well-disciplined Mercy squad took a 23-19 halftime lead into the locker room and never looked back. The monkey was finally off of their backs.

“We just wanted to keep playing strong defense,” said Marion. “I thought we played very physical on their post players, holding them to one shot and that was the key. And we also found the basket.”

The Magic were led by junior point guard Khadija Mitchell with a game high 15 points. “We just had to push the ball up the floor,” said Mitchell. “This was a breakout game for us.”

Mitchell’s ability to manage a disciplined offense was complimented by junior Jessica Zikorus, seniors Clare Naldrett and Kate Bell and senior co-captains Lauren Moniuszko and Marcia Bond.
Indeed, Mercy was very successful in holding the IND Indians to one shot, beating them time and time again to the boards but was equally as successful from the foul line and from the field.

It was a sweet victory for the Magic who were also celebrating the 20th Anniversary of their 1987 Championship Team. A handful of players from the 1987 team were on-hand and acknowledged during halftime.

IND just could not get on track. “We needed more heart,” said IND junior guard, Amanda Ward. “We didn’t come with heart tonight and Mercy came out strong. They wanted it more than we did and for that I give them credit.” Ward is a quiet but steady player for the Indians, scoring 11 points during the evening.

IND’s head coach, Tully Sullivan, summed it up well after the game, saying “Mercy played their game. They out-hustled us, out-rebounded us and did their job. All the credit goes to them for doing their job, but we’ll be back next year.”