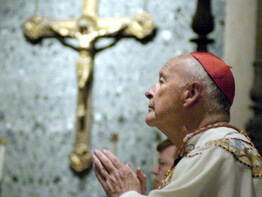 WASHINGTON – To the world, the number seven is lucky. In Catholic tradition, the number seven has been special since God created the world and rested on the seventh day, and the Catholic Church has seven sacraments and seven spiritual and corporal works of mercy.

“It’s extraordinary,” he said of the numerical coincidence marking his birthday. “I’ve been saying to people, ‘Play that number!’“

On a more serious note, he commented, “I’m grateful to God that I made it.”

Cardinal McCarrick marked his 30th anniversary as a bishop June 29. He was an auxiliary bishop of New York, and later served as the founding bishop of the Diocese of Metuchen, N.J., and as the archbishop of Newark before being installed as Washington’s archbishop in 2001 and retiring last year.

On May 31, 1958, he was ordained a priest in his hometown, New York City. This May 31, he marked the 49th anniversary of his ordination to the priesthood and began his 50th year as a priest.

“I celebrated Mass in the seminary that morning,” said Cardinal McCarrick. Before he celebrates his 50th anniversary, he has a year “to be the priest the Lord wants me to be,” he said.

On July 7, the cardinal celebrated his birthday as he usually does, with his traditional “Uncle’s Day” gathering with his family, for an outdoor Mass and picnic on the grounds of a New Jersey parish, a time when the churchman who has dined with world leaders can relax and have a hot dog surrounded by the children in his extended family.

His first year of retirement has been a busy one, as the cardinal has traveled around the world and received many awards. In an interview with the Catholic Standard, Washington’s archdiocesan newspaper, he confessed that he has not had much time for a favorite pastime, fishing. Last summer, he fished about three times and, he admitted, “I have nothing to show for my fishing adventures.”

Nor has he had time to learn Arabic, as he hoped to do in his first year of retirement. He has the books, but he hasn’t yet had the uninterrupted blocks of time to learn the language. The cardinal, who speaks five languages, said he has probably been “on the road too much” to begin to master Arabic.

In retirement, the cardinal’s travels have taken him to Moscow, South Africa and Lesotho, Canada and the Balkans. He flew to Argentina to give a talk at the Catholic University of Buenos Aires, and to Auckland, New Zealand, where he gave eight talks in three days at a eucharistic congress.

He also spent a weekend praying with Benedictine monks in Minnesota, and traveled to the Holy Land to continue working on a program that is encouraging religious leaders there to work together for peace in the region.

One of the most poignant trips the cardinal made this past year was to war-torn Lebanon in August on behalf of Catholic Relief Services, the overseas aid agency of U.S. Catholics, to express solidarity to the people there, in his words, “as a bishop, a pastor and a friend.”

He called for an end to the fighting and an end to “the suffering of all God’s people here, Muslim, Jewish, Christian and others who innocently face terrible destruction and are powerless to prevent it.” Upon returning to Washington, the cardinal called on the world’s nations to “act quickly to bring peace and justice to our sisters and brothers in this part of our one human family.”

In the interview, he expressed sorrow at the return of violence to Lebanon. “I love the Lebanese people,” he said. “They’ve carried the Christian torch in the Middle East. They’ve gotten along for generations with their neighbors. To see this disintegrating is a cause of tears and sorrow.”

In the weeks leading up to his birthday he made a return trip to Kazakhstan, where he spoke on how religions can work for peace in today’s world. He was in Rome for a board meeting, and then went to Ukraine as part of the U.S. bishops’ work in aiding the church in Eastern Europe.

Shortly after his birthday Cardinal McCarrick left for Jordan and Syria on behalf of the U.S. bishops’ Migration and Refugee Services to examine the plight of the estimated 1.5 million Iraqi refugees in those countries.

News reports recently speculated that contacts between the United States and Iran might lead to a visit to that country by an interfaith delegation that would include Cardinal McCarrick.

“It depends on all kinds of circumstances beyond our control,” he said. “I still think it’s important to talk, to smile with, to cry with and work with people.”

The goal of such dialogue, he said, would be to “convince our brothers and sisters in Iran that Americans, religious Americans, are praying and working for peace and justice everywhere, and to learn from them how they think we can help.”

Cardinal McCarrick joked about his busy first year of retirement, saying, “It’s crazy! I keep saying I’m gonna get a full-time job. Retirement is too exhausting.”