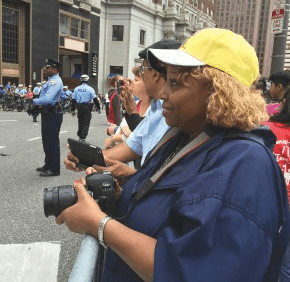 PHILADELPHIA – Mike Feranec thought attending the papal Mass in Philadelphia would be a blessing for his wife, recently diagnosed with breast cancer.

So he put Amy’s name into St. Philip Neri Parish’s lottery and she was chosen, one of 10 to win a free seat on the bus to Philadelphia.

“God gave me a ticket to come,” said Amy Feranec, a physician assistant.

She brought with her a list of the members of her healing group, as a way to pray for them during the two-hour Mass.

The couple, parents of three small boys, along with a half dozen others from the Glen Burnie area, got no farther than JFK Plaza/Love Park, but from that corner they saw Pope Francis celebrate Mass on a nearby big TV screen.

“Every corner was packed with people,” Mike Feranec said.

Mike and Amy Feranec, who is battling breast cancer, pose before a big screen showing the papal Mass in Philadelphia. She holds a list of members of her healing group at St. Andrew Parish in Silver Spring. (Mary Tilghlman/Special to the Review)

Amy Feranec said she initially felt frustrated about not having tickets to the Mass itself – but then saw all the others there without tickets.

“We’re all here for the same thing,” she said, touched as she sat on that street corner and joined with the crowds praying with the pope. The “silence in the center of the city” impressed her, she said.

Her husband was touched by the concern of others. Strangers helped him with Amy’s wheelchair. Those nearby made sure she could see the screen.

“Everybody went out of their way,” Mike said. “It was beautiful.”

Parishioners from St. Bernadette in Severn, St. Philip Neri in Linthicum and the Glen Burnie parishes of Church of the Crucifixion, Good Shepherd and Holy Trinity piled onto the bus, armed with lunch and dinner, cameras and chairs. They wore sturdy walking shoes and extra layers of warmth. Alfred and Gloria Capayas, of St. Bernadette wore T-shirts from the papal Mass celebrated in January in Manila which Alfred attended. Almost everyone donned CR Media yellow-and-white caps made for the occasion.

Until the corner of John F. Kennedy Boulevard and 16th Street, most had walked together from the SEPTA station. Most then continued on, willing to wait in security lines of two hours or more, hoping to catch a glimpse of Pope Francis.

Sonia Guillermo of St. Bernadette braved the long security lines. “I’m glad I did,” she said. Although her group arrived after Mass had started, they were able to receive Communion.

“We were blessed,” she said.

For many, their experience was touched by luck, the generosity of others or maybe the guidance of the Holy Spirit. Ten St. Philip Neri parishioners had their names selected in a lottery for free transportation.

“All I could do was cry,” said Jacqueline Brooks, a 63-year-old retiree.

“It was a phenomenal opportunity to see the pope,” said Bill Szyperski, a member of the Knights of Columbus, attending his first papal Mass. “He seems to really be in touch with people,” he said.

Linda Herilla had left her lottery entry home but wrote her name on a slip of paper torn from her sister’s entry form.

“I feel fortunate to be able to represent my parish,” she said.

“It’s a once-in-a-lifetime opportunity,” said Kevin Scott of St. Philip Neri. His wife Donna, who had been invited to see the pope on the West Lawn of the White House, had dropped his name into the parish lottery.

Sandy Comalli’s seat was a gift. The St. Jane Frances parishioner hadn’t been planning to go to Philadelphia. But her friend Lisa Howard, of Holy Trinity, bought her a bus ticket to celebrate her recent retirement.

Plans kept changing for Linda Rhinehart, of St. Philip Neri. She already had two seats on the Calvert Hall bus and then won the parish lottery. Then she jumped at the chance to obtain Mass tickets. A local man, Richard Legendre, posted on Facebook that he and his wife couldn’t use theirs. They had attended the World Meeting of Families and saw Pope Francis at Independence Hall. Their daughter got sick so they wouldn’t be making the trip. Rhinehart’s daughter, Danielle Turner, contacted him.

Rhinehart and Turner found a place near Eakins Oval – behind a controversial tent over the orchestra that was removed before Mass began. Turner said they spotted the Pope near the end of the motorcade, but they could see him best during the homily.

Joyce Cavey, of Holy Trinity, and Joan Cavey Fielder of St. John the Evangelist in Severna Park found a spot inside security screening. A couple offered them two extra tickets to move closer to the altar.

“What are the chances?” Cavey said. “Was that the Holy Spirit or what?”

After walking a little farther, they returned to their original location where a tired Fielder sat down. Seeing Fielder, a woman from Turkey offered a chair. In return, the two women gave her the tickets they’d decided not to use.

Their location turned out to be a great spot, Cavey said. The pope’s motorcade came by. They got to know fellow worshippers and were entertained by busloads of Mexicans singing and dancing.

“It was unbelievable,” Fielder said. “It was certainly worth the time and effort, that’s for sure.”

Comalli and Howard were amazed at the crowds: “Wall-to-wall people,” Howard said. Though they were too far to see the altar, they missed the pope’s motorcade and Communion ran out, she said she still felt the spirit. “It was an incredible feeling,” she said. “It was such a blessing. I really felt a part of it.”

For the handful who decided on that corner by JFK Plaza, it was close enough.

John Canterna, of St. Philip Neri, was philosophical about the location. “I wasn’t alone in the situation,” he said. “Everybody was nice. The brotherly love was there.”

For more coverage of the papal visit, click here.