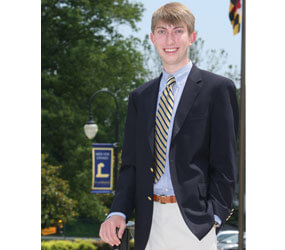 TOWSON – When Johnathan Franck looks at the moon, he sees untapped potential.

If helium-3 was mined, the 18-year-old Eagle Scout raved, it could become a possible fuel for fusion reactors.

“It could be used to make a clean fuel reaction and provide energy,” he said, noting that there is a very limited supply of the element on Earth.

Franck dreams of being part of an aerospace engineering team that may one day mine the moon. The ambitious parishioner of the Catholic Community of St. Francis Xavier in Hunt Valley is working to make that vision a reality.

Last summer, Franck interned with NASA at the Goddard Space Flight Center in Greenbelt. Scientists replicated the environment satellites would encounter at launch and in space, and Franck’s job was to keep a database record of test failures on vibrations and temperature changes.

“It was interesting because I could make conclusions about where we want to go in the future because certain tests didn’t have as many errors as others,” he said, “so if NASA wanted to save money or if they wanted to cut down on tests, they could look at what they had done through my database research.”

Franck, who has been interested in astronomy since he was a boy, also worked on a satellite with the Department of Defense. Using dimensional drawings that replicate what the actual satellite looks like, Franck added dimensions so machinists could create the piece that goes into the satellite.

“I could see the development of these drawings and, a few days later, I could actually see the parts coming out of it,” said Franck, an AP Scholar who earned a 4.32 cumulative grade point average at Loyola and who was recently honored as one of the Archdiocese of Baltimore’s Distinctive Scholars.

The database and satellite work during his internship solidified Franck’s career goals, he said.

“NASA really went out of its way to make it exciting,” he said. “I was doing meaningful work. They gave presentations by famous NASA scientists. We could ask questions and meet people behind a lot of the scientific information we have in the world today.”

Franck knows that it could be a long time before scientists return to the moon, much less mine it. Until that day comes, he said, he hopes to work in space tourism or satellite creation.

The serious-minded student, who was a member of Loyola’s award-winning forensics team and robotics club, admitted that his pursuits were not always so lofty.

“During my freshman year, I was into videogames,” he said. “I moved away from that and focused more on reading and doing things like studying and looking into philosophy. Rather than spending my time on things that don’t actually really accomplish anything, I moved onto long-term goals of education.”

The shift in focus has paid off. Franck plans to study aerospace engineering at the University of Maryland, College Park.