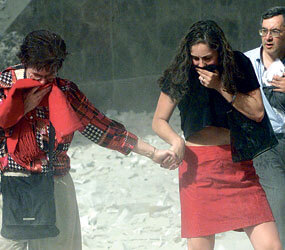 With the memory of 9/11 still an aching scar on the nation’s psyche, and in the wake of the many recent natural disasters such as earthquakes, hurricanes, tornadoes and floods, the government and people of the United States must develop a “culture of resiliency” in order to successfully absorb future onslaughts.

That’s the view of Loyola University Maryland professor of psychology, Dr. Martin F. Sherman, who recently co-authored two major studies examining the lessons we need to learn from the terrorist destruction of the World Trade Center towers 10 years ago.

Resiliency, as in the ability to recover readily from adversity, “is essential if we are to deal as well as possible with what terrorists or nature may throw at us,” Sherman said in an interview with The Catholic Review.

“People need to be trained and prepared,” he said, and that process needs to be promoted by local and national governments, and by business and industry administrators.

“If we’re trained and prepared for disasters, then we can survive well both physically and psychologically,” Sherman said. “And that needs to become part of our culture.”

While a remarkable number of people survived the 9/11 World Trade Center attack, many more might have had they known what to do, he noted. His studies showed, among other things, that there was insufficient emergency preparedness and education, which resulted in barriers to exits, inadequate emergency exit signs and unnecessary congestion, as well as communication failures.

Simply put, his studies found, WTC administrators, workers and occupants were not properly trained or prepared for an orderly and speedy evacuation.

“Being prepared is the most important factor in building resiliency,” Sherman said. “We can control preparedness, and we are at the greatest risk when things are not within our control.”

His 9/11 studies revealed that those who were the least prepared were the most likely to suffer from psychological disorders in the immediate and long-term aftermath of the disaster. “And those were strong findings,” Sherman said.

When the recent earthquake struck Maryland, Sherman was in his office working. As soon as he felt the tremors and saw books cascading from his bookshelves he knew immediately what had happened.

“I ran outside right away and at the same time shouted to my colleagues that they needed to get out,” he said.

Most of them did not; they remained where they were, unsure and puzzled by the event, not recognizing that it was an earthquake, Sherman recalled.

“I’d lived in California so I knew immediately what was happening,” he said.

Sherman acknowledged that FEMA (the Federal Emergency Management Agency) advises against leaving a building during an earthquake, as he did.

“I didn’t know how strong the building was, or whether it was earthquake proof, and so it made the most sense to get out of it and into the open,” he said. “I would do the same thing if it happened again.”

Getting away from the building and its potential for collapse was a way for him to have some control over what was happening, he explained.

“The fact is that humans like to feel as though they are in control of their own environment,” Sherman said. “Even the illusion of control calms them down. The more we feel we can control our lives the better off we are.”

“If we are prepared and trained for a disaster, no matter what it is, then we can feel we are in control to the extent that we can be,” he said. “The fact is that humans like to feel as though they are in control of their own environment,” Sherman said. “Even the illusion of control calms them down. The more we feel we can control our lives the better off we are.”

“If we are prepared and trained for a disaster, no matter what it is, then we can feel we are in control to the extent that we can be,” he said.

FEMA, the Federal Emergency Management Agency, offers on its web site detailed guidelines for how people need to be prepared for and to deal with disasters, urging Americans, for example, to provide themselves with emergency kits.

“That’s all well and good,” Sherman said, “but what they (FEMA) should be doing is providing people with free emergency kits to really make sure people are prepared.” Advice without action doesn’t help much, he said.

While the media plays an important role in informing people of pending disasters and providing other helpful information, it can do more by helping build “the culture of resiliency” in its regular, non-disaster reporting, Sherman said.

“Presenting the consequences of a disaster is helpful so that people can better prepare for one that may be headed their way, but it’s not just headlines, like when a hurricane is nearly upon us, but a matter of helping promote regularly the reality of how we always need to be ready and prepared,” he said.