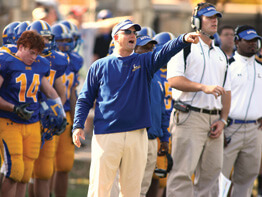 The football team from Loyola Blakefield, Towson, is just one victory away from completing what some would call a dream season.

The Dons have emerged from a brutally tough Maryland Interscholastic Athletic Association A Conference schedule with a 10-0 record heading into Baltimore’s biggest high school stage – the Nov. 27 Turkey Bowl at M&T Bank Stadium.

It’s the final game for both teams, and perhaps the last of some players’ careers.

“It’s a culmination event,” Coach Brian Abbott said. “Win or lose, you know it’s the end. They have an appreciation for the history of the game.”

If the season has indeed been a dream for the Dons, there have been more than a few penetrating moments of cold, hard reality.

Abbott sat in his office at the school’s Burk Hall recently and said, modestly: “It’s been crazy, but it’s basically, ‘How do you overcome it as a team?’ ”

While the team has gone through its schedule like a machine and hopes to win its sixth straight Turkey Bowl, the players have had their collective innocence exposed for the area to see.

The death of kicker Dennis Woolford during a late September car crash in Jacksonville shook the school. Also a goalie on Loyola’s soccer team, Dennis left a massive void on campus.

Three weeks later, starting quarterback Leon Kinnard suffered a broken leg on a rushing play during a 20-7 win over Mount St. Joseph High School, Irvington. The injury ended the season for the University of Connecticut commit, leaving the Dons without their three-year field general.

In the wake of adversity, Abbott said, boys have become men this season.

“The key is finding someone they identify with,” he said. “They’ve worked together to make that happen.”

Loyola is on the verge of winning its second straight conference championship thanks to the capable play of backup quarterback Conor Bruns, running back Terence Garvin and receiver Brandon Floyd.

This could be one of the best teams in school history even if the coach isn’t ready to make that claim yet.

“I never really judge teams year by year, you can only evaluate your team after the season is done,” Mr. Abbott said. “The neat thing about this team is they never get down.”