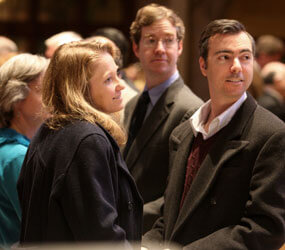 Tears come easily to Walt Brooksbank when it comes to talking about his wife of 46 years, Ann.

The couple has seen other through tough times, such as the 2008 death of their son, Father Kevin W. Brooksbank. Just in the last year, Ann has had a stroke, a heart attack and a blood clot.

“He was there all the time, even if I wasn’t aware he was there because my brain was gone,” Ann said. “When he had his heart attack, I was there for him. You keep each other going.”

The Brooksbanks have also seen each other through exhilarating times, particularly raising their four children. They currently are parishioners of St. Joseph in Cockeysville.

The couple was one of 70 with ties to Baltimore City’s Loyola University Maryland to renew their vows during a Feb. 13 Mass at the school’s Alumni Memorial Chapel. Older alumni recommitted to their spouses by taking their hands once again, while younger couples held their children in their arms and re-pledged their love.

“I’m proud that the school does this,” Walt Brooksbank said. “It’s neat.”

Walt Brooksbank recently talked to a fellow Loyola graduate who had been married for three years. They shared stories of loved ones.

Walt graduated from Loyola in 1963, while Ann received her degree from Mount St. Agnes College the same year. That school later merged with nearby Loyola. The Brooksbanks, however, didn’t meet each other in college.

They attended St. Ambrose Catholic School in Park Heights together and Walt delivered the newspaper to her family when they were children.

“We go back a few years,” Walt quipped.

Brian Oakes, Loyola’s director of alumni relations, helped organize the vow renewal event. He said the school’s campus ministry office contacted him because they noticed a decline in the number of weddings at alumni chapel. He said there was misconception amongst alumni that there is a three-to-four-year wait for chapel weddings.

“We’re always trying to find ways to get alumni engaged in service or campus ministry,” Oakes said. “I said, ‘Why not invited everyone back to renew their wedding vows?’ We really thought that if we had 20 couples, we would call it a success. The next thing we knew, we were up to 70 couples.”

Those couples brought with them 200 total guests for the Mass and the ensuing reception inside the campus’ McGuire Hall.

“This turned out much more than we ever thought it was going to be,” Oakes said.

Oakes graduated from Loyola in 1999 with an undergraduate degree, earned his MBA a year ago and has been working in alumni relations for the last three years. Oakes renewed his vows with his wife, Schoen while his two daughters looked on. Like Walt Brooksbank, Oakes grew up with his wife, whom he married in 2004. His parents came down from his native Philadelphia and renewed their vows as well.

The Valentine’s Day spirit was evident during the reception. Ann Brooksbank believes the key to any marriage is “patience.”

She looked at her husband and asked “It’s been good, right?”

“Oh yeah,” Walt said before lovingly smiling at her.