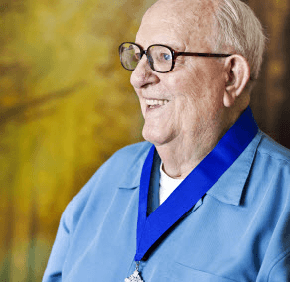 When Joseph Simon was in the third grade, he remembers taking his allowance and heading to a theater on York Road to watch a movie about the Boy Scouts.

He enjoyed the film so much, he stayed in his seat and watched it again and again, before his father marched into the theater to take him home.

Seventy-plus year later, Simon, 84, of Hamilton received the Silver St. George award in April from the National Catholic Committee on Scouting (NCCS). The award is presented to NCCS members with substantial contributions to Scouting, according to the NCCS website. Each year there are only six recipients nationally.

“Like any award, most of the time I think people who get them think they don’t deserve them,” Simon said, explaining his reaction. “I just thank the dear Lord for everything he’s allowed me to do.”

Simon is believed to be only the second Silver St. George Award recipient, after Cardinal William H. Keeler, archbishop emeritus of Baltimore. Cardinal Keeler, an Eagle Scout, received the award in 1998 – with Simon as the presenter.

“I don’t even come close to him,” Simon said.

Simon’s devotion to Scouting dovetailed with his service to his country. In 1944, during World War II, he said he lied about his age and enlisted in the U.S. Navy, where he was a seaman in charge of radio detection and ranging. After his honorable discharge, he resumed his involvement with Scouting in 1946.

A parishioner of St. Dominic in Hamilton, Simon has volunteered thousands of hours of his time for numerous Scouting positions – in addition to working full time for the U.S. Department of Defense for 43 years at Aberdeen Proving Ground and Fort Meade.

“I generally don’t consider it (the long volunteer hours) a hardship,” said Simon, who added that Scouting “is what God wanted me to do. I guess it’s what I should be doing. I guess it’s my little angel saying ‘do it.’ ”

An Eagle Scout himself, Simon as an adult leader has served as junior assistant Scoutmaster; neighborhood, unit, area, district and roundtable commissioner; and as a regional chairman and national advisory board member for the NCCS.

Currently, Simon is an at-large member of the Baltimore-area Boy Scouts of America Council; the archivist for the Archdiocesan Catholic Committee on Scouting; and serves on the NCCS advisory board and its religious emblems committee.

“I’m a Catholic and I’m a Boy Scout,” Simon said. “The National Catholic Committee on Scouting marries the two together. I think the faith is the most important thing, the Scouting just helps with that.”

Ethan Draddy, chief executive officer of the Scouts Baltimore Area Council, said the Silver St. George award “demonstrates an extraordinary lifetime commitment to the value of Scouting, to the auspices of the Catholic Church.”

His five adult children – he has 10 grandchildren and two great-grandchildren –were Boy Scouts and Girl Scouts. He has been a widower since 1998.

Simon estimates that he devotes about 40 hours each week to Scouting and plans to continue his involvement “as long as my body lets me.”

“Just do your best, ‘On my honor I will do my best,’ ” Simon said, quoting the Scout oath. “When you slip a little you go to confession.”