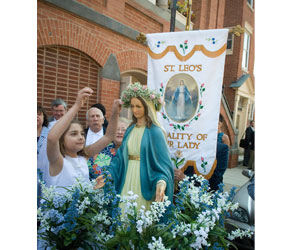 Parishioners of St. Leo turned out in large numbers May 8 to greet Archbishop Edwin F. O’Brien. He was in Little Italy to celebrate Mass on the Third Sunday of Easter, which coincided neatly with Mother’s Day and the honoring of Mary.

The Mass, which preceded the May crowning of the statue of the Blessed Mother and a procession through the neighborhood, brought out families honoring their moms, local community groups and a full contingent of Dominican Sisters of St. Cecilia, from Mount de Sales Academy in Catonsville.

Former Baltimore Mayor Thomas D’Alesandro III and Italian Council President Francesco Legaluppi were among those who heard the archbishop’s message about the importance of brotherhood and daily reflection on the resurrection.

Archbishop O’Brien gave thanks to the Dominican Sisters, who are currently overseeing 60 young women in formation, and all mothers who were present, who received a special blessing from the archbishop and a pink carnation from ushers.

The archbishop had special praise for mothers.

“They are a courageous army,” he said, “given the pressures against family and the secular attitude toward family. It’s a sacred vocation.”

The celebration included some light-hearted humor.

Jim Plowden, grand knight of St. Vincent Pallotti Council of the Knights of Columbus at the parish, gave Archbishop O’Brien, a New York native, a Yankee cap and joked, “This is a token close to your heart, but not necessarily to that of our congregation.”

Father Adam Parker, secretary to the archbishop, was given an Orioles cap. When the archbishop handed Father Parker his cap to hold, he deliberately stacked his Orioles cap over the Yankee cap before setting both aside, which led to smiles and laughs all around.

Other gifts included books, from the staff of the Reverend Oreste Pandola Learning Center, which occupies the former St. Leo School.

“Thank you all,” Archbishop O’Brien said, “it’s been a spirited morning. This is a truly great parish and I’m so proud of you. I don’t know of any parish in the archdiocese that celebrates this day more beautifully or more meaningfully than St. Leo’s.”

Archbishop O’Brien reiterated how impressed he was with St. Leo’s commitment to family and service to community.

“St. Leo’s sets a good tone for the diocese,” he said. “It’s such a warm community where everybody knows everybody and their grandfathers.”

At the crowning, Ingrao, 8, wearing her first Communion dress and veil, placed a rose and baby’s breath crown on the statue of the Blessed Mother.

Parishioners then followed the statue of Mary as it was carried from Exeter Street to Fawn to South High and then Stiles Street. Several mothers who walked the route reflected on what the Blessed Mother and Mother’s Day meant to them.

“Mother’s Day is special because I have children,” Nancy Benicio Menefee said. “The Lord blessed me with them. Not everyone is blessed with children. I also have six grandchildren. The youngest is 16, the oldest is 28 and they all go to church.”

Tina DeFranco, mother of two, said that the “crowning of the Blessed Mother is perfect for Mother’s Day. She’s a symbol for all mothers and what we want to emulate.”

“She (Mary) was unquestionably the greatest image of what a mother should be,” he said.