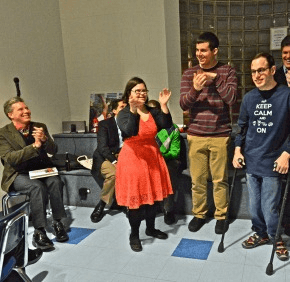 By Mark Zimmermann
Catholic News Service
WASHINGTON – Tim Shriver says his new book “Fully Alive: Discovering What Matters Most” is “really a long thank-you letter to a lot of people who helped shape me,” and is also an attempt to say something to our culture about what really matters in life.
Shriver, chairman of the Special Olympics, noted in his book how people with intellectual disabilities have been his teachers in life, helping him learn “something bigger we’re all looking for.”
When he was a little boy, his parents Eunice and Sargent Shriver started “Camp Shriver” in the backyard of their family’s Maryland home, pairing children with and without intellectual disabilities in playing games together – swimming, running, climbing trees, and riding horses – and becoming friends along the way.
That proved to be the genesis for the Special Olympics movement founded by Eunice Shriver a few years later, which began with games at Chicago’s Soldier Field in 1968.
Tim Shriver, who held hands with and played with children at Camp Shriver, continues his late mother’s work as he leads the Special Olympics, an organization that now includes 4.4 million athletes with intellectual disabilities in 170 countries around the world. In his book, he said those experiences have led him on a voyage of discovery, in which he has learned that “all life is beautiful.”
“They taught me that we are all totally vulnerable and totally valuable at the same time. They modeled lessons in love and fulfillment that I didn’t even know were possible. They changed everything,” Shriver writes in his book.
“The modern world elevates reason, efficiency, control, and independence,” Shriver said in an interview with the Catholic Standard, Washington’s archdiocesan newspaper. “People with intellectual disabilities send the opposite message: that we’re interdependent, that patience is more important than efficiency, that relationship is more important than wealth, that compassion is more important than control, that ultimately, none of us are in control.”
That logic might seem counterintuitive, he notes in the book. He also makes the argument that in his mother’s famous family, the Kennedys, perhaps the sibling that had the most impact was not Eunice or her brothers, former President John F. Kennedy, former Attorney General Robert Kennedy, or Senator Ted Kennedy, but their sister Rosemary, who had an intellectual disability.
“In some ways, she was the source of the heart of the family, she was the person who was God’s way of saying, ‘pay attention to what matters most,’” Shriver said. Shriver contends that his Aunt Rosemary’s lessons about love and human dignity inspired Eunice to found first Camp Shriver and then the Special Olympics, and shaped his uncle’s famous “Ask Not” inaugural address, former President Kennedy’s clarion call to serve our country and to serve others.
In the book, Shriver writes about his mother’s work on President Kennedy’s commission that helped chart a blueprint for the United States to better serve people with intellectual disabilities and their families. The president called the nation to shine light and offer hope to children who too often “live in the shadows,” a message Shriver says still has relevance for the estimated 250 million people with intellectual disabilities worldwide, many of whom face discrimination and social stigma.
Religion also offers the world a message that prevailing cultural perceptions of people with intellectual disabilities are wrong, Shriver said. Faith helps people see others with “the eyes of love,” he said.
In “Fully Alive,” he writes about how his parents’ enduring Catholic faith shaped their belief in social justice and the God-given dignity of all people, leading Eunice to found Special Olympics and Sargent to start the Peace Corps and serve in other government programs promoting opportunities and a better life for all Americans.
In the book, Tim Shriver prints a prayer written by his father that thanks God for the opportunity to work on behalf of the Special Olympians, “because they teach us to love one another, because they teach us to respect all of your creatures of every race, every religion, every nation, of all ages; because they teach us that we are all – every one of us – dependent on you and on one another.”
In the interview, Shriver reflected on the lessons he has learned from his teachers – people with intellectual disabilities – and their joy, spirit and courage. “Basically, they taught me to fall in love with God, to fall in love with life, (and) don’t be afraid,” he said. Their example taught him that “we are fine just as God made us.” “Only faith can make sense of what seems impossible: that a person with Down syndrome is as important as the president of the United States or a Nobel Prize winner,” Shriver said.
Shriver, a member of Holy Trinity Parish in Washington, expressed admiration for Pope Francis and his call to “go out into the field where people are wounded and see God in them.” The pope’s message reflects “the heart of love,” a love for God and a love for his creation, he said.
In the interview, Shriver reflected on his own faith, saying, “I think all of us as Catholics need to deepen our capacity to recognize God in one another. We recognize God in the Gospel, in the sacraments, in the saints, the liturgy, (and) the rosary. We need to be reminded that we also need to recognize God in one another, and maybe most profoundly, in ourselves.”
Zimmermann is editor of the Catholic Standard, newspaper of the Archdiocese of Washington.