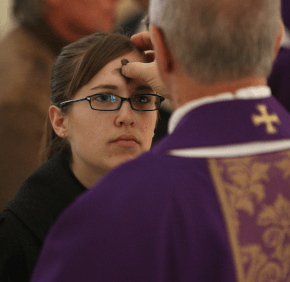 UPDATED 9 a.m. Feb. 13, 2013 – As Catholics throughout the Archdiocese of Baltimore prepare for Ash Wednesday and the start of Lent Feb. 13, Monsignor Arthur W. Bastress hopes they will take time to strengthen simple habits of faith.

Pray in the morning and evening, said the pastor of the Shrine of St. Alphonsus in Baltimore, and set aside five minutes every day to be quiet in the Lord’s presence. Go to confession and receive the Eucharist frequently.

“I would like to see people get back to some of those simple things of faith,” Monsignor Bastress explained. “Don’t go running around trying to find something else to do. Do the simple things well.”

Lent is a penitential season leading up to Holy Saturday and Easter Sunday. The 40-day period of preparation provides believers an opportunity to grow deeper in faith. It is meant as a time to recall one’s baptism – doing it in solidarity with those who will be baptized into the church on Holy Saturday.

Traditionally, many Catholics “give up” something during Lent in the spirit of sacrifice – a favorite meal or television show, for example. Many others do something “extra” during the season such as visiting a sick neighbor.

Catholics are encouraged to attend Mass on Ash Wednesday and receive ashes on their foreheads, symbolizing mortality and a call to turn away from sin.

On Ash Wednesday and all the Fridays of Lent, Catholics older than age 14 are obliged to abstain from meat. On Ash Wednesday and Good Friday, those 18-59 should fast, which means taking only one full meal (or two smaller meals not to exceed one meal) and only liquids between meals. The size of the full meal or the two smaller meals depends on the individual’s physical needs. If someone’s health may be seriously affected by abstaining or fasting, he or she is excused from the obligation.

Archbishop William E. Lori is encouraging Catholics to take advantage of opportunities for receiving the sacrament of reconciliation during Lent.

Continuing a program that began several years ago, the archdiocese is promoting “The Light is on for You” campaign. Catholics may go to any Catholic parish in the archdiocese for the sacrament every Wednesday, Feb. 20-March 20, 7-8:30 p.m. Other times may be available at individual parishes.

In addition to providing more opportunities for confession, some parishes will offer Lenten missions or services for Stations of the Cross. St. Joseph in Cockeysville will offer its mission Feb. 10-Feb. 11 at 7 p.m., with a 7 p.m. Mass on Feb. 12.

“You could think of it as an extended homily,” said Father Ernest Cibelli, associate pastor at St. Joseph. “As Christians, we’re constantly being called to conversion and the season of Lent is especially a time for that. It’s connected with Lent as an opportunity to call people to greater conversion.”

In keeping with the practice of almsgiving, some parishes and Catholic organizations will provide opportunities to support the poor. Baltimore-based Catholic Relief Services, for example, will start its annual Lenten rice bowl collection Ash Wednesday. Of the money raised through CRS Rice Bowl contributions, 25 percent will remain in local dioceses and will be used to alleviate hunger and poverty in the community, Susan Walters, a CRS spokeswoman, said in an email.

Watch a video of Father Leo Patalinghug working with CRS to cook up a meatless meal.

Friday “fish fries” are ways many parishioners get together, with some faith communities such as Our Lady Queen of Peace in Middle River offering the popular meals in conjunction with Stations of the Cross.

Father Kevin A. Mueller, pastor, said in addition to bringing people together, these events make church “more than a place you go on Sunday for an hour.”

“Since we’ve had those dinners,” Father Mueller said, “there are maybe people who wouldn’t have come to Stations (of the Cross) who are now at stations.”

Archbishop William E. Lori will celebrate Ash Wednesday Masses at 12:10 p.m. at St. Alphonsus in Baltimore and 5:30 p.m. at the Cathedral of Mary Our Queen in Homeland.

Vegetarian meals are for more than Lenten Fridays

Priests offer tips for Catholics long absent from the confessional