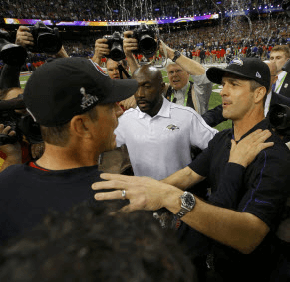 The cover of Sports Illustrated asked “Does God care who wins the Super Bowl?” and some comments on social media during the game seemed to indicate that the man upstairs – not in the rafters of the Superdome, but the man really upstairs – had a hand in the game, noting that the power outage turned the momentum toward the San Francisco 49ers, so “God must be a 49ers fan.” In the end, as we know, the Ravens prevailed. So is God a Ravens fan?

As the Baltimore Ravens progressed through the NFL playoffs, it became a common sight to see Ray Lewis remove his jersey at the end of the game to reveal a black T-shirt, emblazoned simply, “Psalms 91.” If you have ever heard Father Jan Michael Joncas’ “On Eagle’s Wings,” you are familiar with the psalm: “You who dwell in the shelter of the Most High, who abide in the shade of the Almighty, say to the Lord, ‘My refuge and fortress, my God in whom I trust’” (Ps 91:1-2).

San Francisco quarterback Colin Kaepernick has Bible verses tattooed on his arms. And it was common to see kicker Justin Tucker make the Sign of the Cross before each field goal attempt. Many professional football players on both teams embrace the Lord, and are not shy about their faith.

So, for which team did God root? Neither. And both.

The Almighty does not concern himself with deciding winners and losers on the playing field. However, God created the human body, and the Lord rejoices when we use those bodies well. The Apostle Paul often wrote about running the race and fighting the good fight. He encouraged the followers of Christ to “let us rid ourselves of every burden and sin that clings to us, and persevere in running the race that lies before us, while keeping our eyes fixed on Jesus, the leader and perfecter of faith” (Heb 12:1-2) At the 2002 Olympics in Salt Lake City, Salesian Father Bernhard Maier, “chaplain for sport” for the predominantly Catholic country of Austria, told a reporter that fairness “is a central virtue to sport,” and the topic should be taught to all involved. Fairness should apply in all our daily activities, whether we are professional athletes or not. God rejoices when his children love their neighbors as themselves, which is one of the cleanest ways to define fairness.

The Orioles’ and Ravens’ successful seasons have been such a boon to the city and the region because of the sense of community pride and the “family” atmosphere that comes from uniting under a common cause and banner. Wearing Ravens’ purple or Orioles’ orange bespeaks a sense of joint effort, even if we are not on the field or diamond. We are proud to be fans. In a similar way, we unite under the banner of Catholicism. Just as there is no shame for a pro athlete to profess his or her faith, neither should we be ashamed to do so. Because the Lord is our refuge, “No evil shall befall you, no action come near your tent. For he commands his angels with regard to you, to guard you wherever you go” (Ps 91:10-11).

It would be well for us to remember, while we spend untold dollars on sports gear and tailgate parties and celebrations, that many in our community won’t have such opportunities. When sports pros such as Ray Rice, Ed Reed, Torrey Smith and Tyrod Taylor take time to join in outreach efforts at Catholic Charities’ Christopher Place or at St. Vincent de Paul’s Sarah’s Hope, they call attention to the needs in our community and inspire others to help.

We congratulate Coach John Harbaugh and the Ravens on a great season. We rejoice in their championship. And we look forward to serving our community, as a “team” united in faith and love for our fellow people.

Harbaugh parents brace for ‘thrill of victory,’ ‘agony of defeat’