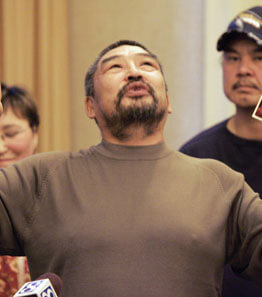 FAIRBANKS, Alaska – The attorney for plaintiffs in more than 100 claims of clergy sex abuse announced Nov. 18 a $50 million settlement with the Society of Jesus for cases involving more than a dozen Jesuits posted in Alaska between 1961 and 1987.

However, Jesuit Father John D. Whitney, superior of the Jesuits’ Oregon province, said in a statement that “there are still many issues that need to be finalized before it is appropriate to make an official announcement about a settlement.”

He said the province was disappointed by Anchorage attorney Ken Roosa’s announcement, which he described as “premature and detrimental to the work of healing about which we are all concerned.”

The Diocese of Fairbanks is a co-defendant in the cases. Separate lawsuits against the diocese remain unresolved.

The Associated Press reported that Roosa gave the news service copies of e-mail correspondence he exchanged with the Jesuits’ attorney, including one message sent Nov. 16 by Dick Hansen, the lawyer representing the religious order. It reads: “This e-mail will confirm that a settlement has been reached. … The settlement calls for $50,000,000 to be paid to the plaintiffs/claimants in exchange for releases of all claims against the Jesuit defendants.”

The Fairbanks Daily News-Miner newspaper Nov. 20 quoted Father Whitney as confirming the announcement and saying he hopes “that it can be the beginning of some real transformation.”

The newspaper quoted Father Whitney as saying the province, which includes Alaska, Washington, Oregon, Idaho and Montana, is involved in 11 more lawsuits and some cases not yet filed. He was quoted as saying, “Mistakes were certainly made by predecessors, but the allegation that Alaska is a dumping ground (for pedophiles), that simply is not true.”

“I think we didn’t screen well enough,” he said.

The AP said the settlement does not require the religious order to admit fault. None of the priests, deacons and volunteers involved has been charged with criminal offenses.

Robert Hannon, special assistant to Fairbanks Bishop Donald J. Kettler, told Catholic News Service Nov. 20 the statute of limitations has passed, barring criminal prosecution in what he said were 150 cases against the Diocese of Fairbanks.

Hannon said Superior Court Judge Niesje J. Steinkruger, who is presiding over the civil lawsuits against the diocese, has called the parties together for a Dec. 14 attempt at mediating a settlement.

“She seems pretty intent at trying to find a solution,” Hannon said.

He confirmed that filing for bankruptcy remains an option for the diocese.

The diocese last year hired the law firm that helped the Diocese of Tucson, Ariz., with its Chapter 11 reorganization, forced by the expenses of settling sex abuse lawsuits. But Hannon said the settlement by the Jesuits is raising hopes that the diocesan lawsuits may soon be resolved.

“If we had the same kind of financial resources as the Jesuits we might have settled by now, too,” said Hannon, who added that because Fairbanks is a mission diocese it is the only U.S. diocese that reports to the Vatican Congregation for the Evangelization of Peoples.

“Only eight of our 46 parishes are self-sustaining,” he said. The rest are subsidized by the diocese.

The Alaska cases first came to light in 2002 as attention focused nationwide on sexual abuse by priests and how the church handled it. They involved children as young as 5, from parishes and missions scattered around the vast state. Most of the reported incidents occurred in rural villages, although some reports came from Fairbanks, Bethel, Barrow and other towns, he said.
Hannon said over the last six years the Fairbanks Diocese has strived to provide safe environments for children, receiving commendations from the organization conducting audits of the process for the U.S. Conference of Catholic Bishops.

In a statement released by the province, Father Whitney said the Jesuits are “laboring to find just settlements in Alaska and elsewhere for the sake of the survivors of abuse and the many men and women who have had their faith and their lives shaken by the crisis of the last few years.”

He said the Oregon province was proceeding carefully in announcing the settlements out of respect for the people involved.

“Reconciliation is not well served by hasty and ill-considered words, and so we will continue to act with care, with prayerful concern, and with appropriate deliberation in reaching and announcing just and lasting settlements,” said Father Whitney’s statement. “It is what we believe the survivors of abuse and, indeed, all people involved in this matter deserve.”