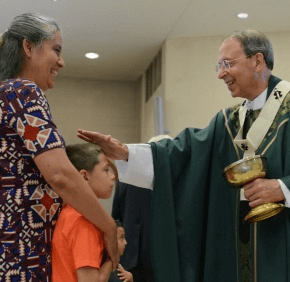 By Maureen Cromer
mcromer@CatholicReview.org
LANSDOWNE – It was standing room only for the 10 a.m. Mass at St. Clement I in Lansdowne Aug. 26 as the congregation celebrated its 125th anniversary of the parish.
The Mass, which was celebrated by Archbishop William E. Lori and concelebrated by Father Thomas Malia and Father Roger Brito, assigned priests to the parish, was celebrated in both English and Spanish and welcomed more than 250 members of the close-knit community.
“Even though 125 years seems like a long time,” Archbishop Lori said in his homily, “the origins of the parish are actually much older. From colonial times, when this area was a farming community, the seeds of faith were already being planted.”
Before St. Clement was established as a parish in 1891, the Catholic community in Lansdowne traveled to St. Jerome for Mass and to celebrate the sacraments. After years of traveling into Baltimore City from their farming community, community members asked the pastor of St. Jerome to send priests to Lansdowne to minister to their spiritual needs.
“Religious sisters played a vital role in the life of the parish,” Archbishop Lori said, “including the Daughters of Charity and the Sisters of Providence. Today that legacy continues through the Sisters’ Academy under the leadership of Sister Delia Dowling, a School Sister of Notre Dame, Patricia Ruppert, the principal and its dedicated staff and teachers.”
In recent years, as the Spanish-speaking community continues to grow, the parish has found new ways to be more welcoming Hispanics. St. Clement now offers ESL classes, charismatic worship and hosts a large celebration for the Feast of Our Lady of Guadalupe. Of the 720 registered families at the parish, nearly half of them are Spanish-speaking.
“The older community has been so open and welcoming to our new Hispanic neighbors and all of their spiritual and cultural offerings,” said Deacon Paul Gifford, pastoral life director.
Father Malia, who has celebrated the sacraments at St. Clement for more than 14 years, said parishioners are “very practical in their faith.”
“They have been so courageous in the face of change,” he said, “and have merged the different styles of prayer and devotion into something so very beautiful.”
Mike Bealefeld, a parishioner of St. Clement for 16 years, called the faith community “strong and diverse.”
“When we come together it’s a place where everyone knows each other and no one is judging you,” he said.
See also:
Archbishop Lori commemorates St. Teresa’s canonization with Mass at Baltimore Basilica
Statue at St. Ursula honors foundress of religious community and two students
PrevNext