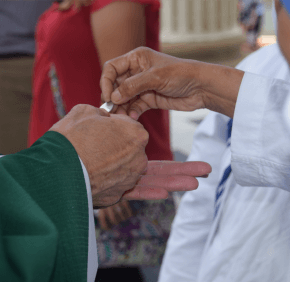 Parishioners of the Baltimore Basilica were joined Sept. 4 by visitors from as far away as Ohio for a Mass to celebrate the canonization of St. Teresa of Kolkata earlier that day in Rome.

Courtney Mathews of Cleveland, Ohio, said that when she thinks of Mother Teresa, she thinks of service and her gentle spirit. “We don’t really have modern-day saints. She’s certainly an inspiration,” she said.

In his homily, Baltimore Archbishop William E. Lori said the congregation was spiritually united with all the pilgrims who traveled to Rome to witness in person the canonization of St. Teresa of Kolkata, “who will always be known to us simply as ‘Mother Teresa.’

“Even though we could not experience the thrill of seeing and hearing our beloved Pope Francis declare this kindred spirit a saint, we nonetheless can share in the Church’s joy over Mother Teresa’s gift of love: for she gave herself entirely to the Lord and to the poorest of the poor,” the archbishop said at the Basilica of the National Shrine of the Assumption of the Blessed Virgin Mary.

He welcomed two members of the Missionaries of Charity, the order founded by St. Teresa, who serve at Gift of Hope, a hospice in East Baltimore founded by the saint.

“To be a disciple is to be like the Lord himself who had nothing and gave everything. Mother Teresa fixed upon this Gospel truth in founding the Missionaries of Charity,” he said. “Not only would they serve the poor, they themselves would live a life of poverty. Everything a Missionary of Charity owns, she can fit into a paper bag and every MC convent is a place of greatest simplicity and Gospel joy.”

Archbishop Lori noted that members of the order now number 4,500 worldwide, including the four who serve in Baltimore.

Archbishop William E. Lori preaches the homily near a copy of the official canonization portrait of Mother Teresa at the Baltimore Basilica during the Mass commemorating the canonization of St. Teresa of Kolkata. The original art for the tapestry was commissioned  for the Vatican by the Knights of Columbus, of which the archbishop is supreme chaplain. (Ann M. Augherton/CR Photo)

The archbishop recalled that he met Mother Teresa on many occasions, especially when he was a priest and auxiliary bishop in the Archdiocese of Washington.

“I first saw her in the 1980s when a home for women was opened; she was in chapel – a diminutive figure in an old, blue sweater – sitting on the floor, praying,” Archbishop Lori said. “I was among those involved in helping set up an AIDS hospice in Washington and on a number of occasions offered Mass for the final vows of her sisters. I’m not sure she knew my name but she once called me ‘that nice young bishop.’ ”

Two-year-old Zelie Maria Hepburn and her mother Lindsey pray at the Baltimore Basilica during the Mass commemorating the canonization of St. Teresa of Kolkata. The Hepburns are parishioners of St. Ignatius, Hickory. (Ann M. Augherton/CR Photo)

Two Missionaries of Charity sisters who serve in the Baltimore Gift of Hope attended the Mass, sitting in the front row, feeling “very happy.”

“She’s always been a saint to us – we lived with her,” said Sister M. Christea, noting that now all the world knows that their Mother is a saint.

Sister M. Aloka, originally from the Kerala region in southern India, said some of Mother Teresa’s sisters came to her school, first sparking her interest in the order. She said she knew then that she had to become a missionary.
Sister Christea, who was originally from Bombay, said she always heard on the news about the work Mother Teresa was doing. She realized her own desire to serve the poor. The simplicity of the saint’s life was inspiring, she said.

After the Mass, the sisters greeted well-wishers and distributed holy medals with Mother Teresa’s image and the words, “Pray for us,” on the reverse, kissing each one first. Mother Teresa used to hand out Miraculous Medals in the same way during her lifetime.

The Antonyraj family — sons Benedict (from left) and Francis, mom Shanthi and dad Nesan – originally from Kerala, India, talk with Archbishop William E. Lori outside the Baltimore Basilica after a Mass commemorating the canonization of St. Teresa of Kolkata. They are parishioners of Immaculate Conception, Towson. (Ann M. Augherton/CR Photo)

Nesan and Shanthi Antonyraj and their sons Benedict and Francis, members of Immaculate Conception Parish in Towson, attended the Mass after reading about it in the Catholic Review. They had never seen the future saint while they lived in their native Kerala, India. Most Indians considered her their own, despite the fact that she was born to an ethnic Albanian family in Skopje, in what is now part of Macedonia, Nesan said.

“Now she is a saint, now she is timeless for generations and generations after that,” Shanthi said. She noted that St. Anthony, an Indian saint from the 13th century, is still popular today. “Now five centuries later, many generations will know (St. Teresa).”

She said the saint’s devotion to the Blessed Mother set an example. “She was always serving Jesus through the eyes of Mary. We are called to do the same.”

Her husband added that Mother Teresa was sent to India to begin her new mission. “The Gospel is spread from (there), the Gospel of love,” he said.

Maryland Arciaga of St. Philip Neri Parish in Linthicum Heights came to the Mass wearing a small holy medal with Mother Teresa’s image that she received from the Missionaries of Charity after she took students from her parish to a vacation Bible school at Gift of Hope. Arciaga’s ministries have taken her to places such as the Philippines and Haiti, to teach basketball skills and basic English to children in orphanages.

She said she sometimes has hesitation about going on mission trips and the emotional strains that come with it. Knowing that Mother Teresa herself had doubts “makes me feel not so bad. Where I thought it was a burden, it’s something I need to do.”

Holly Stone, one of the lectors at the Mass, said she wants to begin volunteering at the Gift of Hope, calling Mother Teresa her “hero.”

She said the new saint lived her whole life doing what Jesus called for in Chapter 25 of Matthew’s Gospel: feeding the hungry, clothing the naked, serving the sick. “She did all of that. She was the light of Christ on earth. I want to do that, too.”