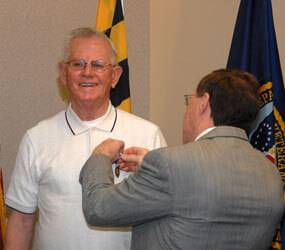 As he approached his 80th birthday, Alfred Stracke recalled “the hell” that was Pork Chop Hill, the site of two Korean War infantry battles fought during the spring and summer of 1953 while the U.S. and the Communist Chinese and Koreans were negotiating an armistice.

“Hundreds and hundreds of soldiers died there for nothing,” he said, noting that there was no strategic or tactical value for the terrain. The bloody engagement and the heroism and suffering of the men who fought it became the inspiration for the semi-fictional 1959 movie, ‘Pork Chop Hill’ with Gregory Peck.

“They called it the forgotten war with good reason and, yes, I feel bitter about it,” said Stracke, a retired printer, Calvert Hall graduate, and daily communicant at his home parish of St. John the Evangelist, Severna Park. “Although,” he added, “I should have never, never come back. The good Lord brought me back.”

A machine gunner with the 7th Division, 32nd Regiment, Stracke remembers all too well that summer in 1953 when he was trying desperately to dig a foxhole deep enough to protect him and his ammunition carrier from the furious Communist Chinese mortar barrages. Shrapnel from one mortar shell that exploded just a few feet from him struck his hand. Although not severe, the wound was painful. When he was discharged from the army in 1954, Staff Sgt. Stracke noticed on his papers that he had been awarded a Purple Heart as a result of the action.

Problem was, he never got it. His discharge papers also revealed he had earned a Bronze Star, a Korean Service Medal, and a United Nations Medal, none of which he received. Over the years, he tried unsuccessfully to get his medals, sending letters and making phone calls to military authorities and the Veterans Administration. Finally, he was told that his and some other official records had been destroyed.

“I felt like I just didn’t count, that all that fighting in Korea was for nothing, and I didn’t get as much as a ‘thank you,’” Stracke said. “We were treated like the boys who came back from Vietnam years after Korea. No one wanted anything to do with us, no one cared.”

But, 56 years later someone did indeed care.

When he visited the Veterans Administration Maryland Health Care System in Baltimore to pick up a life alert device, he met Janet Ramsey, a VA social worker. In chatting with her he told her about his disappointment in never receiving his Purple Heart, as well as the other medals.

“He felt expendable when he came home from Korea, and I wanted to make him feel important,” said Ramsey. She thought Stracke’s long-held desire to get his Purple Heart was “more than reasonable, especially given the extent of his combat experience.

“Sometimes all we can do is listen but fortunately in this case our actions spoke,” she explained.

She contacted Marvin Fields, the Army Wounded Warrior 2 representative in the Operation Enduring Freedom/Operation Iraqi Freedom/Operation New Dawn office who assists active duty soldiers in similar circumstances. She pleaded Stracke’s case and Fields agreed to help, calling on a military contact he had at nearby Fort Meade.

“It only took 56 years, but it was quite a moment,” Stracke said, “and it’s all due to Janet Ramsey. I’ve known women in my lifetime who were great at their jobs, but none can compare to her.”

The medal hanging from his chest was something Stracke thought he’d never see.

As for the others he didn’t receive, well “if Mrs. Ramsey says she’s working on it; then I’ll get them,” he said.

“What is important, in my opinion, is listening to veterans, and trying to meet their needs,” Ramsey said. “That’s the least we can do for those who’ve done so much for us.”