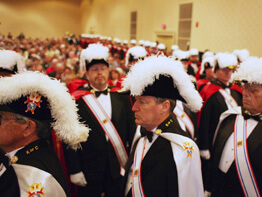 NASHVILLE, Tenn. – The Knights of Columbus will continue to fight politically on issues important to the Catholic Church, such as abortion, marriage and embryonic stem-cell research, pledged Supreme Knight Carl Anderson.
“One of our most important traditions throughout our 125-year history is that we do not, as an organization, become involved in partisan politics,” Anderson said in giving his annual report on the first day of the fraternal order’s Aug. 7-9 national convention at Opryland Hotel in Nashville.
“This does not, however, mean that we take no interest in public policy issues,” he continued. “When an issue directly affects our most fundamental values as Catholics, such as abortion, or the institution of marriage, or public funding of embryonic stem-cell research, as leaders in the Catholic community, we must, and we do take a stand.
“Since the 1970s, when abortion was suddenly transformed from being an almost unspeakable crime to a supposed constitutional ‘right,’ we have worked tirelessly to enact laws that would limit and ultimately end the unrestricted abortion license in the United States,” Anderson said.
The Knights also have been in the forefront fighting legalized abortion in other countries where the order is active, such as Canada, Mexico, the Philippines and Poland, he said.
“My brother Knights and ladies, on abortion, we will never give in,” Anderson promised.
To those who say it is time to put the issue of abortion behind us, he said, “We have to ask: What kind of Catholics do they think we are? Is it possible that they do not realize that we will never cease to persevere against the evil of abortion?”
Anderson also outlined the Knights efforts to fight the funding of embryonic stem-cell research in several states as well as opposition to the legalization of same-sex marriage.
“In these efforts we have a simple strategy,” Anderson said, “trust the people to decide.”
He said the Massachusetts Legislature should be ashamed for refusing to put the issue of same-sex marriage on the ballot there after petitions asking for a referendum with 170,000 signatures were submitted.
“This is Mary’s continent – under the protection of Our Lady of Guadalupe,” Anderson said. “No other place on earth has as many practicing Catholics as the Americas. It is up to us – in our lives, in our homes and in our families – to put our faith into practice. It is time Mary’s Knights reclaim her continent for her.”
Anderson announced that the Knights of Columbus will hold its first international Marian congress at the conclusion of the 2009 convention, which is to be held in Phoenix.
Before the supreme knight’s report, greetings were conveyed to the convention from President George W. Bush, Prime Minister Stephen Harper of Canada, President Gloria Macapagal-Arroyo of the Philippines, Mexican President Felipe Calderon, Polish President Lech Kaczynski and Pope Benedict XVI.
“The Knights of Columbus have actively built up the kingdom of God on earth, and I know you will continue to devote your energies and your apostolic zeal to promoting the church’s mission wherever you may be,” Pope Benedict wrote in his letter to the convention, read by Archbishop Pietro Sambi, apostolic nuncio to the United States.
During the States Dinner Aug. 7, Cardinal Tarcisio Bertone, Vatican secretary of state, received the Knights’ “Gaudium et Spes” Award, the organization’s highest honor.
It recognizes individuals for their exemplary service to the church and humanity in the spirit of Christ as articulated by the work of the Second Vatican Council. “Gaudium et Spes” is the Latin name of Vatican II’s Pastoral Constitution on the Church in the Modern World.
In accepting the award, Cardinal Bertone said he was “reminded of one particular passage from ‘Gaudium et Spes,’ where we read that the church aims solely to ‘carry on the work of Christ under the guidance of the Holy Spirit, who came into the world to bear witness to the truth, to save and not to judge, to serve and not to be served.’”
He said the church’s mission “is to spread the Gospel of love through specific good works.”
“This is a mission that involves all the baptized – priests, consecrated and lay persons – since bearing witness to truth and love means taking an active part in Christ’s redemptive work,” he said.
The award is accompanied by a $100,000 honorarium. Cardinal Bertone said he would use the money to assist charitable initiatives that he will select after he returns to Rome.
Cardinal Bertone is the seventh recipient of the award since the Knights established it in 1992.
Past winners include: Blessed Mother Teresa of Calcutta, 1992; Cardinal John J. O’Connor of New York, 1994; Cardinal James A. Hickey of Washington, 2000; Cardinal William Baum, former archbishop of Washington and former head of the Apostolic Penitentiary, 2001; Latin Patriarch Michel Sabbah of Jerusalem, 2002; and Jean Vanier, the founder of the L’Arche movement that establishes homes for people with development disabilities and the friends who assist them, 2005.