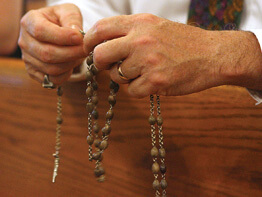 Rose Mary Cherry acknowledges that her Catholic faith was shaken after her 27-year-old nephew, Michael Riston, was murdered nearly four years ago. Coming only four years after her husband, Lynn Cherry, also died, Ms. Cherry said the loss of two beloved people in her life was very difficult. But through it all, she never abandoned her religious convictions.

“I was born a Catholic, and I’ll always be a Catholic,” said the longtime parishioner of St. Rita, Dundalk. “You are given crosses to bear and you bear them as best you can.”

For the last year, the weight of Ms. Cherry’s crosses has been lightened by participating in a monthly rosary prayer service sponsored by the Knights of Columbus St. Charles Borromeo Council 3960. Held in the restored Harrisonville chapel of Holy Family, Randallstown, people from across the region gather every fourth Tuesday of the month at 7 p.m. to pray the joyful, luminous, sorrowful and glorious mysteries of the rosary. Lasting a little more than an hour, the prayer session is followed by food and fellowship.

During the Aug. 28 rosary service, Ms. Cherry was one of 25 people who knelt together in prayer before an icon of Our Mother of Perpetual Help. Gently holding her well-worn rosary in both hands, the Dundalk native softly repeated the series of Hail Marys, Our Fathers and other prayers that make up the traditional Marian devotion.

“I wanted to go someplace outside of Dundalk where there were no memories,” said Ms. Cherry. “It’s my one hour of peace. It takes my mind off that time.”

Ms. Cherry said she is inspired by the beauty of the Holy Family chapel, which was built in 1881 and served as Holy Family’s original church. She is also strengthened by praying with others, she said.

“It’s very peaceful,” she said. “I enjoy the companionship.”

Steve Roscher, a Holy Family parishioner and Grand Knight of the St. Charles Borromeo Knights of Columbus Council, came up with the idea of the rosary service with Past Grand Knight, Mike Hargadon. The first service more than a year ago attracted 16 people and the largest service attracted 35 people, he said.

“Devotion to Mary seems to be making a comeback,” said Mr. Roscher, noting that the service attracts people of all ages. “The Knights have always had a special devotion to Mary and we thought this was a good way of exhibiting that devotion in a visible way.”

Pointing out that his Methodist wife sometimes attends the service, Mr. Roscher said the gathering draws Catholics and non-Catholics alike.

Mr. Hargadon, a parishioner of the Patronage of the Mother of God, Arbutus, said the intercession of the Blessed Virgin Mary can make a difference.

“Anytime you can pray to Jesus through Mary, it’s powerful,” he said.