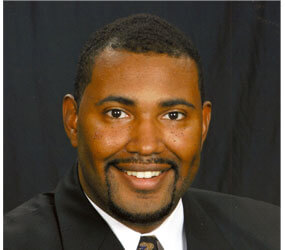 NEW ORLEANS – F. DeKarlos Blackmon, 34, of Huntsville, Ala., has been elected the youngest supreme knight and CEO in the history of the century-old Knights of Peter Claver.

Running on a platform of unity and progressive change, Blackmon was elected to the post during the national convention of the nation’s only African-American Catholic fraternal organization and the world’s largest black Catholic lay organization.

The convention, held in early August, drew more than 1,000 members from around the country to St. Louis’ Millennium Hotel.

Blackmon is the pastoral associate and director of liturgy and music for St. Joseph Catholic Church and taught vocal music and theology at Pope John Paul II Catholic High School, both in Huntsville.

He holds a master’s degree in business administration with a concentration in public management and is pursuing a master of arts in pastoral ministry from Saint Mary’s University of Minnesota.

Blackmon also served in the U.S. Army chaplains’ corps. In addition to his military service, he has served as choral director, pianist, organist or music director for various churches, Protestant and Catholic, throughout the southeastern United States and in Korea.

In an address to the post-convention joint board of directors meeting with the Ladies of Peter Claver, Blackmon said he brought “a vision that moves beyond the go along to get along politics that we have experienced in our order, and the rhetoric that divides us.”

“These times demand more than making each other feel comfortable with the status quo,” he added. “I won’t be satisfied until every knight has a place at the table and is respected for the talents he can bring to the table. I won’t be satisfied until a concerted effort has been employed to effectively grow this organization through recruitment, reclamation and retention.”

Based in New Orleans, the Knights of Peter Claver was founded in 1909 in Mobile, Ala., for black men who were barred from other organizations in the Catholic Church. Named for St. Peter Claver, a Jesuit priest from Spain who ministered to African slaves in Cartagena, Colombia, in the 1600s, it has units in more than 400 Catholic parishes in the United States and South America.