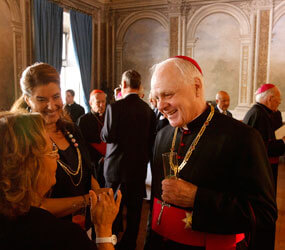 VATICAN CITY – Officials at the Vatican headquarters of the Equestrian Order of the Holy Sepulcher of Jerusalem welcomed U.S. Archbishop Edwin F. O’Brien as their new pro-grand master.

Archbishop Giuseppe De Andrea, the assessor of the chivalric organization, placed a gold chain and pendant around Archbishop O’Brien’s neck and told him his new role “is like a chain that ties him to the Holy Land” and to the knightly order of the Holy Sepulcher.

The archbishop said that just a month ago he had no idea that he would go from leading the Archdiocese of Baltimore to heading an order made up of nearly 25,000 members around the world. His appointment was announced Aug. 29.

“I am grateful to the Holy Father for his trust in me and hope in the years ahead I will be a help to the Holy See and to the wonderful land where Christ walked,” he said to all those gathered.

In an interview with Catholic News Service, the 72-year-old archbishop praised the work Cardinal Foley had done for the order and said “I hope, if not to fill his shoes, to follow his footsteps.”

He said he believes some of the assets he’ll be bringing to his new appointment include his experience traveling the world helping Catholics in the military service, as well as knowing “most of the bishops pretty well in the United States.” About half of the order’s membership is from North America, he said.

He said as pro-grand master, he hopes to convince more people of the importance of belonging to the chivalric organization and “that this is a worthy spiritual endeavor.”

“We look to forward the cause of peace in the Holy Land – that’s the Holy Father’s burning desire – and to stopping the exodus of Christians, to make more available the holy places to more people and to encourage pilgrimage to the Holy Land,” he told CNS.

The number of pilgrims from the United States and other parts of the world to the Holy Land has dwindled considerable and he said he would like to see more people visit the “singular, unique part of the world where Christ walked, taught, performed miracles and rose from the dead.”

The archbishop said he would not begin his work at the order until his successor in Baltimore had been installed.

The fraternal organization, a more than 900-year-old order of chivalry under the patronage of the Holy See, is dedicated to supporting the Latin Patriarchate of Jerusalem and to responding to the needs of Catholics in the Holy Land. Its work covers Israel, Palestine, Jordan and Cyprus. The knights fund seminaries, schools, hospitals and social centers throughout the patriarchate.