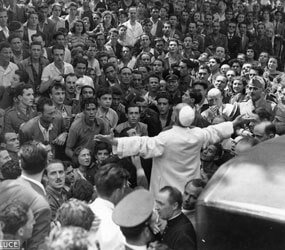 VATICAN CITY – When the inside history of U.S.-Vatican relations is finally written, one of the more surprising chapters might be the role played by the Knights of Columbus.

It’s a story that combines charity and diplomacy, most of it accomplished behind the scenes.

Over the past 90 years, the Knights have touched the lives of poor kids in Rome by building playgrounds – including some where future cardinals would play soccer – and funding soup kitchens.

At the Vatican, the organization has financed myriad restoration projects, paid for satellite TV transmissions of papal events since the 1970s, and even helped promote the excavation of St. Peter’s tomb.

Evidence of the Knights’ good works, known and unknown, are on display until October at Rome’s Capitoline Museum in a special exhibit titled, “Everybody Welcome, Everything Free,” the motto used by the organization for its European centers during World Wars I and II.

The fact that Rome hosted such an exhibit at all is a measure of the esteem in which the Knights of Columbus are held throughout the city.

It was Pope Benedict XV who in 1920 invited the Knights to work in Rome. They built a series of playgrounds open to all without charge, some of which are still in use. The playgrounds took on new significance during World War II, when nuns and priests pleaded with the pope to keep the facilities operating.

After a U.S. airstrike on Rome’s San Lorenzo neighborhood in 1943 damaged the Knights’ playground there, the organization’s director in Rome, Count Enrico Galeazzi, was sent by Pope Pius XII with a personal letter for Franklin D. Roosevelt, asking the U.S. president to spare Rome and its civilian population from further bombings.

The pope’s letter, which is displayed in the exhibit, was never delivered. By the time Galeazzi got to the United States, Italy had signed an armistice with the Allies and Germany had invaded Rome.

After the war, the Knights occasionally assumed a surrogate diplomatic role between the Vatican and the United States. In 1982, Knights officials arranged a meeting between U.S. President Ronald Reagan and Cardinal Agostino Casaroli, the Vatican secretary of state. The two laid the groundwork for full diplomatic relations and, not long afterward, the two states exchanged ambassadors for the first time.

Modern visitors to the Vatican encounter the Knights’ imprint at almost every turn – though they are seldom aware of it.

In recent years, the organization has sponsored restorations of the facade of St. Peter’s Basilica, its atrium, the dome of the Blessed Sacrament chapel, its grottos, papal tombs and the giant statues of Sts. Peter and Paul in St. Peter’s Square.

After the Vatican excavated the necropolis area beneath St. Peter’s in the late 1940s, the Knights sponsored a documentary film on the discoveries. Later, they funded the creation of the Vatican Film Library.

The Knights have also kept up the playgrounds and other projects in Rome, adding more modern facilities.

Carl Anderson, supreme knight of the Knights of Columbus, said the organization’s activities have helped solidify friendship between Italy and the United States, especially after the two world wars.

“Pope Paul VI said at the end of the Second Vatican Council that the Good Samaritan was the model of spirituality in the Catholic Church,” Anderson said at a news conference in Rome to inaugurate the exhibit. He said the Knights were simply implementing that concept in a concrete way.

Anderson said that when Rome officials came to him with the idea for the exhibit, the Knights went through their archives and were surprised at the things they found. Among the items displayed are wartime telegrams and shell fragments from the Allied bombing of Rome in 1943.

The exhibit’s largest item is a U.S. Graham-Paige limousine, presented to Pope Pius XI in 1929 by the Graham brothers, members of the Knights of Columbus. Later that year, when the Lateran Pacts finally allowed popes to go freely outside Vatican City walls, the pope used it to travel across the city to the Basilica of St. John Lateran.

The Graham-Paige later became the favorite car of Pope Pius XII, and when it was retired it had more than 30,000 miles on the odometer.