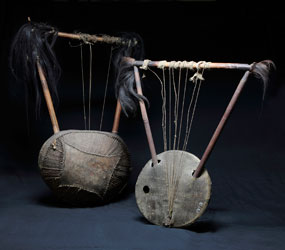 VATICAN CITY – Ceremonial and sacred objects from different parts of the world present enormous challenges for art restorers; they must clean, repair and preserve very unusual and delicate materials such as blue kingfisher bird feathers glued onto an 18th-century Chinese metal headdress or hair and reptile skin decorating an Ethiopian string instrument made out of a gourd.

The Vatican’s Ethnological Missionary Museum has more than 80,000 unusual artifacts from all over the world documenting the vast cultural and spiritual heritage throughout history.

Pope Pius XI created the Ethnological Museum in 1926 to demonstrate the Holy See’s respect for the world’s different cultures by showcasing their artistic traditions.

While most of the objects were gifts to the pope, some had a more painful past.

One mutilated 18th-century wooden statue of the four-legged Polynesian deity Tu is thought to be the only figuration of this god left in the world. A missionary priest saved it and a number of other small statues from the hands of his fellow missionaries who sought to destroy all pagan idols on the island of Mangareva.

Other objects are proof of a more peaceful encounter between Christianity and native cultures, such as a 19th-century wampum belt from Quebec with figures symbolizing a Native American community forming an alliance with French Catholic colonizers.

The ethnological museum, however, had been closed for 40 years and the collection was “locked up in boxes” after it was moved from the Apostolic Palace at St. John Lateran to the Vatican Museums, said Arnold Nesselrath, delegate of the Vatican Museums’ laboratories and scientific department.

The museums eventually hired a full-time team of experts in 2001 to take inventory and run a laboratory specializing in the care and conservation of ethnological or folk artifacts made with complex multiple materials, he told Catholic News Service.

In the past decade, the lab has earned itself an international reputation for its avant-garde restoration techniques, said Father Nicola Mapelli, head of the Vatican’s Ethnological Museum.

In an effort to share discoveries and form an expanding network of specialized restorers, the museum and its laboratory sponsored a day-long workshop Oct. 4. They invited dozens of art historians, conservationists and restorers from all over the world to share new approaches to conservation that also use traditional materials and methods.

The hope, organizers said, is to create an active international exchange and data bank so restorers and curators can more easily discover an object’s meaning and find the best and least invasive ways to save the world’s vast and often endangered cultural and religious heritage.

Not having a good understanding of an object’s original use or its meaning can spell disaster, some speakers said.

Christian Feest, an Austrian ethnologist, recalled working at a museum long ago that hired “a failed artist” to restore its ethnological collections. The repair method at the time, he said, entailed “buying glue at the supermarket” to piece together pottery shards.

Today the preferred protocol, according to the speakers, is to first gain a complete understanding of an artifact’s history and use, which means not just researching the past, but establishing working relationships with living artisans and experts from the object’s community of origin.

While CT scans, neutron particle accelerators and other high-tech tools are ideal for spotting hidden damage and discovering what the object is made of, restorers must use traditional substances and techniques for repair when possible, said Francesco Civita, the curator of the Japanese collection at the Stibbert Museum in Florence.

“Any attempt to use alternative methods and approaches is a grave error that severs the culture and its expression and does violence to the cultural and structural integrity of a work,” he said.

“A more genuine understanding of the cultural roots of a people” is vital to saving a work in way that is respectful not just of the work, but also of the culture and people it represents, he said.

A group of Italian restorers discovered the delicate task of respecting local approaches when they took part in a project in Yemen to repair water damaged vaults inside the immense 14th-century Al-Ashrafiya Mosque in Tabriz.

Paolo Mariani of Venice’s cultural heritage institute said his group soon discovered that for the Yemeni, any Islamic monument “is the manifestation of religion,” of the divine, so even the tiniest broken tile fragment was “precious material” that needed to be salvaged, he said.

The highly-stylized calligraphy on the walls also had to be retouched with extreme care or tackled by local experts because the phrases are considered sacred text and even the slightest error in execution would cause “a huge uproar,” he said.

Before Vatican restorers began work on their collection of painted silk Japanese kakemono scrolls from the 17th-century, they researched how the scrolls depicting Buddhist deities were meant to be used. They were hung and then rolled up in a constant cycle over the years as part of an annual ritual of praying for the salvation of the soul and body of the deceased, said Nadia Fiussello, a Vatican restorer.

The Vatican scrolls had been damaged, she said, because some were hung on display in the museum for too long and never rolled up while others had not been unrolled for decades.

Now the repaired scrolls will go on a similar cycle of display and storage, she said.

Nesselrath said the Vatican Museums have “some of the greatest treasures of mankind,” like ancient Greek and Roman statuary and the Sistine Chapel. Yet, the ethnological collection is a sign that the Vatican “has been paying attention to world culture,” too.