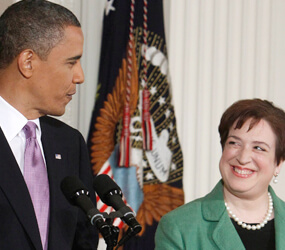 Kagan, 50, would be the fourth woman to sit on the court and the first justice in 38 years to reach it without first serving as a judge. She would become the third Jewish member of the court; the other six are Catholics.

With no judicial record, Kagan will be screened on the basis of her work as solicitor general – a post she has held for a little more than a year – and for her long academic record as dean of Harvard Law School and a professor there and at the University of Chicago. She also served in the Clinton administration as associate White House counsel, assistant to the president for domestic policy and deputy director of the Domestic Policy Council. She also spent some time in private law practice.

President Barack Obama introduced a beaming Kagan as his nominee May 10 at a brief event at the White House. He called her one of the nation’s foremost legal minds. Obama’s and Kagan’s stints on the faculty of the University of Chicago Law School in the 1990s overlapped.

“Elena is respected and admired not just for her intellect and record of achievement,” Obama said, “but also for her temperament, her openness to a broad array of viewpoints, her habit, to borrow a phrase from Justice Stevens, of understanding before disagreeing, her fair-mindedness and skill as a consensus-builder.”

Kagan is the daughter of an attorney-father and a public school teacher-mother, born and raised in New York City. She holds an undergraduate degree in history from Princeton University, a master’s degree in philosophy from Oxford University and her law degree from Harvard.

Two cases involving Catholic institutions have come to the solicitor general’s office this term. Both were requests that the solicitor weigh in on cases the Supreme Court has been asked to accept for review. Neither requested brief from the solicitor has yet been submitted to the court.

One involves a liability claim against a Catholic hospital in Michigan over the discharge of a psychiatric patient who went on to murder his wife. The other case involves an Oregon man’s attempt to sue the Holy See as liable for the actions of a priest in Oregon who sexually molested him.

In October, Kagan argued in the Supreme Court that it was appropriate and constitutional for the Department of Interior to allow a Christian symbol in a remote California federal reserve. In April, the court ruled that a cross-shaped war memorial in the Mojave National could be constitutional, as Kagan and the Interior Department had maintained.