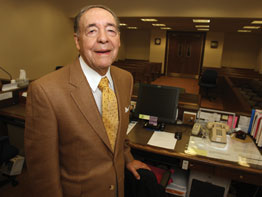 The little boy from Italy clung to his mother’s hand as he stood on the deck of the boat and looked across New York Harbor to the Statue of Liberty.

“It was the most glorious thing I’ve ever seen in my life,” Frank E. Cicone said, eight decades later. “It’s an American dream that came true.”

Ever since, he’s been living the dream and doing his best to live up to the teachings of the Catholic church – as an immigrant child, as a lawyer, as a judge.

Now, at 88, Judge Cicone has been recognized by the St. Thomas More Society of Maryland, a Catholic association of legal professionals, with its annual “Man for All Seasons Award.” The award goes to a Catholic who embodies the ideals of St. Thomas More, the 16th-century English lawyer who was martyred in defense of the church.

“It’s the greatest award a man can receive because of St. Thomas More,” said Judge Cicone.

Judge Cicone, who was appointed in 1973 to the Circuit Court, said he opposes abortion and gay marriage.

“I believe in the power of prayer, and someday, abortions will be a thing of the past,” he said.

“He is not only a man for all seasons, but a man for others,” Judge Tirabassi said. “He was always willing to help others as opposed to helping himself.”

Judge Cicone, a parishioner at Immaculate Conception, Towson, was born in Abruzzi, Italy, in 1920 and came to America with his parents through Ellis Island. The family settled in Pittsburgh, where his father, Marco, was a steelworker.

During high school, Frank Cicone spent summers with relatives in Baltimore, and his family moved to the city after his father got a job at Bethlehem Steel. Judge Cicone served in the U.S. Army in Italy during World War II and reached the rank of staff sergeant.

When he returned, he earned a degree in diplomacy from Georgetown University and his law degree from the University of Baltimore. He worked as a lawyer specializing in litigation, zoning and land use before becoming a Circuit Court judge.

In 1975, he became an administrative judge and often handled settlements of cases, and in 1990, started the Settlement Court, for which he still works part-time.

Judge Cicone lives with his wife, Helen, in Lutherville, and they have three daughters and four grandsons.

Judge Frank E. Cicone will be honored during the Red Mass celebrated at 5:30 p.m. Oct. 23 at the Cathedral of Mary Our Queen. The Red Mass marks the traditional opening of the judicial year.