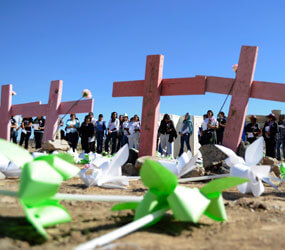 SAN ANTONIO – A top journalist who is a veteran of covering violent conflict in Mexico and Central America has a sober warning for anybody who smokes marijuana: If it comes from south of the border, “it’s heavy with the blood of innocent people.”

Robert Rivard, editor and executive vice president of the San Antonio Express-News, who has lost colleagues killed in violence in countries where he has been posted, told an audience at St. Mary’s University of San Antonio that buying pot feeds and finances the ongoing violence on the U.S.-Mexico border and elsewhere.

It is the same, he said, for the thousands of weapons that make their way from Texas across the border and into the hands of the drug cartels’ gunmen every year. According to Rivard, another factor in the escalating violence is police and government corruption and an atmosphere in which there are no consequences for breaking the law.

Rivard spoke at the university earlier this fall as part of its 2010 President’s Peace Commission series, which focused on violence on the border.

The series was prompted by stories professor William Israel heard last year from students in his communication studies class who came from the border towns of El Paso, Eagle Pass, Laredo and Brownsville. Their personal accounts of the magnitude and reach of drug-related violence were an education for him and their classmates, he said.

Israel, as the event’s moderator, referenced a recent Express-News story by reporter John MacCormack that told of nearly 6,500 people being killed in the Mexico border city of Juarez since 2008. In that time more than 230,000 also have fled the city and 10,000 businesses have been destroyed or closed.

Mexico “is a nation where institutional corruption is visible at every level,” said Rivard, calling its judicial system a facade and saying the rule of law is often absent. There are judges, lawyers, courtrooms and law books, he said, “but the system doesn’t function.”

Fueling the violence, he said, is an awareness that there are no consequences for criminal actions. People fear turning to the police because they are presumed to be on the payroll of drug cartels.

He said President Felipe Calderon is taking a page from Colombia and trying to establish a national police force.

The real story of what is going on in Mexico is difficult to find reported by the mainstream press, according to Rivard. Newspapers and radio and television stations in Mexico censor themselves on reporting the violence, because they have been intimidated by the cartels, he said.

With mainstream media backing down, including Mexico’s largest daily newspapers, the website blogdelnarco.com has become the leading source for news on cartel violence in Mexico. The site was launched in March by an anonymous self-described computer nerd in his 20s, Rivard said.

“Blog del Narco beats all the mainstream press,” he said, though its coverage includes graphic content about the violence. “The government of Mexico goes to it to find out what’s going on.”

Dozens of Mexican journalists have been killed in the last decade. Tallies differ, ranging from “more than 30 since 2006,” according to Freedom House, to 29 in the same period, according to Reporters Without Borders. Calderon began his crackdown on drug cartels soon after taking office in 2006.

Rivard said that even Mexican publishing icon Alejandro Junco – the founder and CEO of Mexico’s largest print media company, Grupo Reforma, who introduced the concept of ethical journalism in Mexico 20 years ago – has felt the pressure of the drug cartels and moved his extended family to Austin for safety.

Shootouts are occurring even in the wealthiest neighborhoods now, Rivard said. A neighbor of Junco’s in the Mexican city of Monterrey sent him a cell phone video of a major shootout in front of a market near his home there.

Rivard said Calderon told him that of the 80,000 semiautomatic or automatic rifles seized from cartel gunmen since 2006, about 90 percent still had serial numbers that were traced to U.S. gun stores – most of them in Texas.

“We all know the truth,” he said. “The guns and ammunition continue to flow out of the Academy (sports and outdoors) stores, the Target stores, the Walmart stores in San Antonio and Dallas and in El Paso, and they’re going into the hands of the cartels and they’re fueling the fire.”

Texas does not regulate the resale of guns and ammunition, unlike California, which also shares a border with Mexico and where there are stringent penalties for illegal resale.

While he respects the right of individuals to have a gun in their home under the Second Amendment, Rivard pointed out there is no constitutional right to resell guns illegally and the government is capable of and should be allowed to track these sales.

“If you’re going to go in and buy 14 guns in three months, somebody ought to come ask you what you’re doing with your guns and can we see them,” he added.