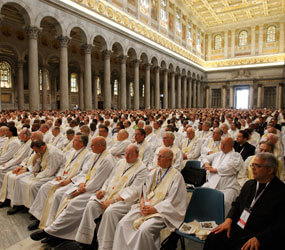 VATICAN CITY – Meeting with nearly 10,000 priests from around the world, Pope Benedict XVI expressed the church’s gratitude for their ministry and encouraged them to resist secularizing influences.

At a vigil in St. Peter’s Square June 10 at the end of the Year for Priests, the pope said the clergy shortage cannot be solved by turning the priesthood into merely “a normal profession, a job,” and added that today’s priests need to be on fire with love for Christ.

While he did not explicitly speak of clerical sex abuse cases, he appeared to refer to the crisis when he defended priestly celibacy. He said celibacy was a scandal for the world because it anticipates eternal life with God, a reality rejected by many people today.

The role of the faith, he said, is to announce this “great scandal” of God’s place in their lives, a task that is made more difficult by the “secondary scandals of our own inadequacies and sins.” He asked for prayers that God would free the church from such sins.

The evening encounter featured testimonials from priests working around the world, including Latin America, France and Hollywood, Calif. When the pope arrived and rode his popemobile through the vast crowd, he was greeted with a standing ovation.

Answering five questions posed by priests, the pope began by expressing his appreciation for their work and his sympathy for the problems they face in ministering to populations that are increasingly large and fragmented.

He said today’s priests must not try to do everything, but should focus their energies in key areas: providing the Eucharist and the sacraments, preaching well, and helping the poor and suffering. He urged them not to neglect their own spiritual lives and, when needed, to “find the humility and the courage to rest.”

He spoke beneath a banner portrait of St. John Vianney, patron of parish priests. The pope proclaimed the yearlong focus on priestly ministry to coincide with the 150th anniversary of the saint’s death.

Several of the questions posed to the pope suggested that the world doesn’t really understand priests or the priesthood.

A priest from Slovakia, for example, said he fully appreciated the importance of celibacy, but was disturbed when reading “the many worldly criticisms of this gift.”

In response, the pope said the church must make clear to an often skeptical world that its practices are not designed to close priests off from people, but to direct them toward others.

An African priest said theology as taught in modern seminaries sometimes reflects modern tastes and tendencies instead of being focused on God and Jesus Christ – as if the world were judging the faith and not vice versa. He said this has led to the “spread of subjective opinions that allow the introduction, even in the church, of a non-Catholic way of thinking.”

The pope answered that this was a difficult and painful problem in the church. He called it an “arrogance of reason” that seeks to deny the greatness of God.

Pope Benedict said he’s seen nearly three generations of theologians come and go, including times when such “scientific” ideas appeared to gain the upper hand, but which today “have grown old, and are practically worthless today, in fact many of them seem ridiculous.” His words were greeted with applause.

All week long, priests from more than 90 countries filled the streets of Rome, attending liturgies and conferences at major churches in the city. They spent most of their time praying, listening and chatting among each other.

Among the approximately 300 from the United States was Father Anton Quang Dinh Van of San Francesco di Paola parish in San Antonio, a native of Vietnam who has lived in the United States since 1981. He said he came to Rome to meet other priests and find better ways to “bring the Gospel to our people.”

Asked about the effect of the sex abuse scandal, he said the close of the special Year for Priests was a moment for priests to reflect on their promises.

“In every generation there is something bad, but the Holy Spirit is there to purify us. There are many holy priests and seminarians who have dedicated themselves to God and the people. It is a very good time for priests to renew their promises,” he said.

Father Robert J. Carr, 51, the pastor of St. Benedict Parish in Somerville, Mass, said his parish had sent him to Rome to celebrate the end of the Year for Priests with the pope.

He said it meant a lot to his parishioners that he be present. Throughout the year, he said, “I’ve been working at being a better priest for them – supporting them, letting them know I am there for them, fostering their creativity.”

As for the sex abuse scandal coming up again during the Year for Priests, Father Carr said he didn’t think it was a coincidence.

“I think what’s going on, I think the Lord is cleaning up his church, strengthening his church because the world is heading for trouble” and holy ministers will be needed more than ever, he said.

Vatican officials and other main speakers at the closing events focused on such themes as “conversion and mission,” the priest’s configuration to Christ, priestly identity and the priest’s relationship with laypeople and bishops.

But several also mentioned the sex abuse scandal in their talks.

The pain of the clerical sex abuse crisis has led to a “providential awareness” that the priesthood must experience a season of rebirth and spiritual renewal, Cardinal Tarcisio Bertone, Vatican secretary of state, told hundreds of priests gathered at the Vatican June 9.

“We have had to experience pain because of the infidelities, sometimes very serious, of some members of the clergy, which has had a negative impact on the credibility of the church,” he said.

Cardinal Bertone reminded the priests that in May Pope Benedict had spoken to reporters of “a ‘persecution’ that was born within the church itself” and said the experience must lead to a conversion, purification and reconciliation.

Quebec Cardinal Marc Ouellet spoke to priests June 10 about an “unprecedented wave of challenges against the church and the priesthood following the revelation of scandals whose gravity we must recognize and sincerely work to repair.”

“But beyond the necessary purification our sins require, we must also recognize that at the present moment there is open opposition to our service to the truth and there are attacks from both outside and inside that aim to divide the church. We pray together for the unity of the church and for the sanctification of priests, these heralds of the good news of salvation,” he said.

Cardinal Claudio Hummes, prefect of the Congregation for Clergy, welcomed the many priests who traveled long distances to be in Rome for the close of the special year.

Speaking at a Mass June 9 in the Basilica of St. Paul Outside the Walls, he said that while priests are called to minister to all Catholics, they have a special obligation to care for the poor who “are marginalized from the table of material, social, cultural and – often – spiritual goods.”

German Cardinal Joachim Meisner of Cologne lamented the drop in the practice of the sacrament of reconciliation, saying it has hurt the church and priests.

“Where a priest is no longer a confessor, he becomes a religious social worker. In fact, he is missing the experience of the greatest pastoral success, which is when he can collaborate to ensure that a sinner leaves the confessional as a sanctified person,” the cardinal said.