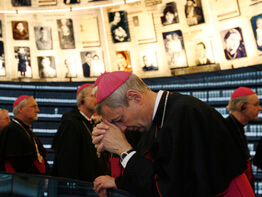 COLOGNE, Germany – Remarks made by German bishops during a recent visit to the West Bank have caused a storm of reaction from Jewish leaders in Germany.

The Central Council of Jews in Germany and the Israeli Embassy responded angrily to comments by Bishop Gregor Hanke of Eichstaett, who compared the situation of Palestinians in Ramallah with that of Jews in the Warsaw ghetto in Poland during World War II.

For his part, Bishop Walter Mixa of Augsburg described the Israel-Palestinian situation as “almost racism.”

The bishops were on a weeklong pilgrimage, which ended March 4 with a visit to Ramallah and Bethlehem in the West Bank. The bishops toured Israel and met with Israeli Vice Prime Minister Shimon Peres and Palestinian President Mahmoud Abbas, as well as with Rabbi Yona Metzger, the Ashkenazi chief rabbi of Israel, and local bishops and priests. They also visited the Yad Vashem Holocaust Memorial in Jerusalem.

According to news reports, Bishop Hanke said: “In the morning (we saw) pictures of the inhumane Warsaw ghetto at Yad Vashem, in the evening we travel to the ghetto in Ramallah. You can only hit the roof.”

Bishop Mixa also referred to Ramallah, which is bound on one side by the Israeli security barrier, as a “ghettolike situation.”

Bishop Hanke later distanced himself from his comments and said in a statement that “comparisons between the events of the Holocaust and the current situation in Palestine are not acceptable and were not intended.” He said he had expressed his personal feelings, and that the immediate impression of the situation in Ramallah had been “harrowing.”

Charlotte Knobloch, head of the Central Council of Jews in Germany, said Bishop Hanke had “either demonstrated an alarming lack of knowledge about history, or he was trying to make the Holocaust victims and the children into the guilty parties and turn himself into their therapist.”

“It is particularly disappointing that the trip which had otherwise exceeded expectations should end with such lapses of judgment,” she said. “The words of Cardinal (Karl) Lehmann (president of the bishops’ conference) at Yad Vashem were convincing and an expression of growing understanding and trust between Jews and Catholic Christians. I can’t believe that this should all now be called into question.”

The Israeli ambassador in Berlin, Shimon Stein, said that anyone who made such comparisons had “either forgotten everything, learned nothing or failed morally.” He accused the bishops of “demonizing one side and operating with double standards” because they had concerned themselves with the Palestinians’ suffering, but not with that of the Israelis who had suffered from Palestinians’ terrorism.

Avner Shalev, chairman of Yad Vashem Holocaust Memorial, said in a letter to Cardinal Lehmann that such comparisons “serve to diminish the memory of victims of the Holocaust and mollify the consciences of those who seek to lessen European responsibility for Nazi crimes.”

In a response, Cardinal Lehmann referred to the words he wrote in the memorial’s book: “Nobody who wishes to be free of the memory of the Holocaust can ever be free.” he added that all the bishops defend “Israel’s right to exist and defend itself.”

Cardinal Lehmann said he understood the “feelings of affront and protest” in reaction to Bishop Hanke’s remarks. He said he regretted the “discordant note … at the end of the trip which many in the Holy Land experienced as injecting renewed hope.”

“The German bishops are and remain aware of their special historical responsibility,” he said.

Monsignor Walter Brandmueller, who is German and the president of the Pontifical Committee for Historical Sciences at the Vatican, said in a radio interview that he could not remember such a serious row between the church and the Jews in Germany.

However, he noted that he had little understanding for the Jews’ frustration.
“One can’t be harrowed in Yad Vashem and then get back to normal business when one sees the misery in Ramallah,” he said. “While the Warsaw ghetto unfortunately can’t be reversed, Ramallah can still be changed.”