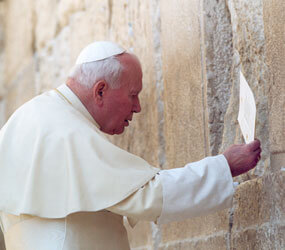 An exhibition on Pope John Paul II and the Jewish people will be on display at the Jewish Museum of Maryland in Baltimore from Sept 2 through Dec. 26.

According to a news release from the museum, “A Blessing to One Another” explores the late pope’s efforts to end 2,000 years of painful conflict between Jews and Catholics.

The Catholic Review and Baltimore Jewish Times are media sponsors for the exhibition, which is receiving support from McCormick & Company, Inc., Simone & Ralph Brunn and Family, The Marion I. and Henry J. Knott Foundation and Von Paris Moving & Storage.

Lead financial support was provided by the Jewish Foundation of Cincinnati and Xavier University.

According to the release, the exhibition was developed by Xavier’s Pope John Paul II Cultural Center, in partnership with the Hillel Center of Cincinnati and The Shtetl Foundation.
Cardinal William H. Keeler, retired Archbishop of Baltimore and moderator for Catholic-Jewish Relations for the U.S. Conference of Catholic Bishops, served the museum in an advisory capacity.

“Cardinal Keeler was instrumental in recognizing how the exhibition could be a vehicle for Catholic-Jewish dialogue,” said Avi Y. Dector, executive director of the Jewish Museum.

“Since Baltimore was the first Catholic diocese established in the U.S. and has long been home to a major Jewish community, it is especially fitting that this exhibition, which celebrates the reconciliation of Catholics and Jews, should travel here to Baltimore.”

Bill McCarthy, executive director of Catholic Charities said, “Catholic Charities views our partnership with The ASSOCIATED and The Jewish Museum of Maryland in the Blessing exhibition as an opportunity to demonstrate our continued work in being a blessing to the City of Baltimore.”

According to the news release, Pope John Paul II was the first pope to enter a synagogue, in 1986; the first to establish diplomatic relations with Israel; and the first to engage in a formal act of repentance for the church’s past treatment of the Jews during the Holocaust and throughout history.

Using photographs, documents, artifacts, videos and interactive devices, the exhibition tells the story of the pope’s long relationship with the Jewish community, starting with his childhood in Poland and the friendships he developed with Jerzy Kluger and other Jewish neighbors.

An opening reception Sept. 2, from 5 to 7 p.m., is open to the public. The Jewish Museum is located at 15 Lloyd Street, near Little Italy. For directions, exhibition hours and cost, telephone 410-732-6400 or visit www.jewishmuseummd.org.