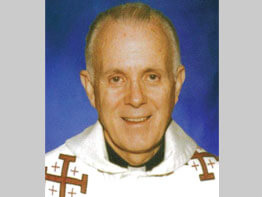 For Father William J. Watters, S.J., it marked a homecoming.

Father Watters, who had served as pastor of St. Ignatius, Baltimore, from 1991 to 2005, returned to that position Oct. 4, Archbishop Edwin F. O’Brien announced.

“It is a joy for me to be returning home,” Father Watters said. “St. Ignatius parishioners are a vibrant and outstanding community of generously welcoming and dedicated people.”

When Father Watters first arrived in 1991, the Jesuits had considered closing then-struggling St. Ignatius, where only 175 people attended the two weekend Masses. He is widely credited with transforming St. Ignatius into a thriving downtown church with more than 600 registered families coming from as far away as Annapolis, Columbia and Westminster.

Father Watters, who had served as executive assistant to the Maryland Jesuit Provincial from July 2006 to July 2008, praised the social consciousness of St. Ignatius parishioners.

“I look forward to sharing with the parishioners in their life and mission of bringing Christ’s Gospel of prayer and service to the City of Baltimore, especially the poor and the marginalized,” Father Watters said.

“It kind of falls in the Jesuit tradition of men and women for others, and they take that seriously at St. Ignatius, and they believe in that way of life.”

Father Watters, 74, pointed to Loaves and Fishes, in which parish volunteers serve Sunday evening meals from a van to homeless and poor people in the city, and the church’s participation in the New Year’s Eve citywide Interfaith Prayer Service.

While at St. Ignatius, with help from lay colleagues, Father Watters founded and served as president St. Ignatius Loyola Academy, now in its 16th year. And in 2006, he helped found Cristo Rey Jesuit High School and serves as chairman of its board.

He taught at Loyola Blakefield, Towson from 1969 to 1975 and served two teaching stints at St. Joseph’s Preparatory School in Philadelphia.