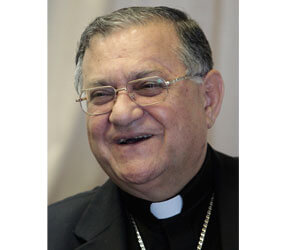 BETHESDA – The Latin patriarch of Jerusalem said he hoped that an effort to grant full U.N. membership to Palestine would be a step toward eventual peace in the region, leading to the “two-state solution.”

In a Sept. 20 interview in the suburban Washington offices of the Holy Land Christian Ecumenical Foundation, Patriarch Fouad Twal told Catholic News Service that “the question of full membership for Palestine does not mean the end of negotiations. On the contrary, they must continue negotiating and speaking to find a solution for everybody, peace for everybody and security for everybody.”

Patriarch Twal, a Jordanian-born Palestinian, said that, in preaching about peace, he often says that it must be “peace for all the inhabitants, otherwise nobody can enjoy peace.” He and other Christian leaders, including Pope Benedict XVI, often cite a two-state solution as the desired path to peace.

Mahmoud Abbas, president of the Palestinian Authority, which administers the West Bank, plans to submit a formal request for U.N. membership and Palestinian statehood Sept. 23 after he addresses the General Assembly. The Palestinian organization has been an observer entity at the U.N. since 1974, but that conveys no voting privileges.

The bid for full membership is considered a step toward status as a sovereign nation, though it would not by itself create a Palestinian state.

The effort is opposed by the United States, which will have a vote on the question in the U.N. Security Council. If that fails, the Palestinians may appeal directly to the General Assembly for status as a nonmember state observer, the same status held by the Holy See.

Patriarch Twal told CNS that it’s time to “give back to the Holy Land its vocation as holy, not land, but as holy, as a land of peace, of coexistence, a land of cooperation between all people.”

He said the Palestinian people have shown great patience through decades of promises by political and religious leaders that have failed to come to fruition.

“They hoped, we hoped, I hoped in many international resolutions that were never fulfilled,” he said. “There needs to be some credibility from the leaders, from political leaders and religious leaders. To give this credibility we must have some concrete steps.”

Patriarch Twal said Palestinians have shown great patience despite wars, checkpoints and other obstacles of daily life, and he expects that will be the reaction if the U.N. efforts fail. However, the climate in the region following citizen-led uprisings in Egypt, Libya and Yemen might well help feed similar unrest among Palestinians, he said, adding, “This is good for nobody.”

“For people to have a sense of peace and hope and quiet they need trust,” he said. “For now there is no trust and hope.”

In a Sept. 15 statement, Patriarch Twal and 10 other heads of Christian communities in Jerusalem called on decision-makers and people of good will to “do their utmost to achieve the long-awaited justice, peace and reconciliation between Israelis and Palestinians so that the prophecy of Prophet David is lived again.”

It listed five principles they said should guide decisions about Palestine’s status. They said a two-state solution “serves the cause of peace and justice” in the dispute over which community has claim to the territory.

Israelis and Palestinians should each live in independent states “with peace and justice, respecting human rights according to international law,” it said.

They added that Jerusalem is “a holy city to the followers of all three Abrahamic faiths, in which all people should be able to live in peace and tranquility, a city to be shared by the two peoples and the three faiths.”

The Latin Patriarchate of Jerusalem functions like an archdiocese, and includes Latin-rite Catholics in Israel, the Palestinian territories, Cyprus and Jordan.