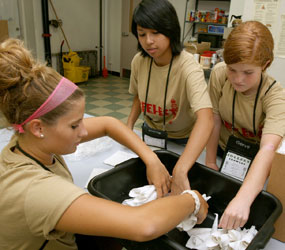 The parishioner of Holy Family in Middletown grabbed some gardening tools and announced, “Let’s get to work!”

Clad in a beige iServe t-shirt that read “Reflect” on the front and “the light of Christ” on the back, O’Neill, 15, started pulling five-foot high weeds and trimming bushes around a backyard fence. Over two days, he and a group of about 15 youths made a property owned by Advocates for Homeless more hospitable for a future resident by cleaning the backyard and painting the front porch.

“It’s having that satisfaction, of getting the work done and helping someone,” O’Neill said as sweat poured down his forehead.

The effort was just a small example of the iServe outreach around Frederick July 21 abd 22 as 125 high school-aged teens and another 26 adult volunteers lent their assistance to various outreach organizations around the historic town of Frederick. Despite temperatures nearing 100 degrees, the teens pushed through their tasks with passion.

“It’s hot,” said Irene Wunderlich, youth minister for St. John the Evangelist of Frederick. “But, they’re out here and they’re joyful and cheerful. There is something special about this event that has the hand of God on it. It transforms lives, a community and individuals in the community.”

iServe began five years ago, when Hagerstown served as the home base of the project while Wunderlich served as youth minister of its St. Mary Parish. She recently began working at St. John, which served as host to iServe this year.

When Wunderlich told the Hagerstown Goodwill store that iServe was moving, she received a call soon after from the Frederick Goodwill store to see if the teens could serve there.

“Every single site we have serve, we have been invited back,” Wunderlich said. “For 125 teenagers to make an impression on agencies is amazing. It’s not just a two-day service event for a lot of these teens. It’s ongoing service.”

Advocates for Homeless executive director Joe Case said his organization would normally have to pay for the work of O’Neill and his fellow teens.

“It’s very costly to run transitional housing units,” Case said. “It’s like someone writing us a several hundred dollar check to get all this done. I had never even heard of iServe. It’s like having a white tornado coming through and cleaning everything up.”

“It really just makes you feel good about giving back to others and knowing that some people don’t have as much as you do and helping them,” French said.

Several teens painted a fence surrounding a cemetery on the campus of Visitation Academy, which is next to St. John the Evangelist. Sisters of the Visitation formerly ran the school; some are buried in the cemetery.

Visitation Academy principal Lynne Kirby told the teens, “You will be blessed many times for your hard work.”

Teenagers from youth groups and high schools have been offering their time for service projects and workcamps both inside and outside the Archdiocese of Baltimore throughout the summer. Some traveled to Tampa Bay, Virginia, New York and areas of Appalachia to make the lives of others better.

In a letter to this summer’s work camp participants, Archbishop Edwin F. Obrien said: “I am proud that you, the young church of Baltimore, are addressing these questions of life while reaching your hands out to others in hope. I find inspiration in your passionate defense of the dignity of all human life. By nourishing your faith in the Eucharist, you commit in a special way to the work of bringing justice and peace to our world.”