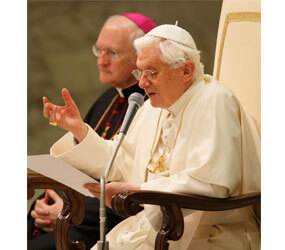 VATICAN CITY – Pope Benedict XVI said capital investments should be dedicated to offering credit to small and medium-sized businesses rather than funneled into get-rich-quick schemes in the financial markets.

Businesses can thrive and produce “social wealth if businessmen and managers are guided by a far-sighted vision, which prefers long-term investments rather than speculative profits, and which promotes innovation rather than focuses on amassing wealth just for oneself,” he told a group of Italian industry owners and businessmen at the Vatican March 18.

“Small and medium-sized business are in even greater need of financing, while credit appears less accessible,” he said.

He said that it is difficult for businesses to compete on a global scale, especially against businesses in countries that offer little or no rights and protections for workers, because higher labor costs make products and services more expensive. Many businesses have had to make large sacrifices in an effort to avoid layoffs and stay competitive, he added.

“In this context, it’s important to overcome that individualistic and materialistic mentality that prompts investments to be diverted away from the real economy in order to favor investments in financial markets, aiming for easier and faster returns,” he said.